The Government Accountability Office (GAO) recently released its annual report to Congress on bid protests filed and acted upon during fiscal year 2013 (FY13).

The report reveals that during FY13, the GAO received 2,429 cases, including 2,298 protests, 56 cost claims, and 75 requests for reconsideration.   A total of 2,538 cases were closed during the fiscal year.

Notably, the most prevalent reasons for sustaining protests were: 1) failure on the part of federal agencies to follow their stated bid or proposal evaluation criteria; 2) inadequate documentation of the record by agencies; 3) unequal treatment of offerors; and 4) unreasonable price or cost evaluation.

Further details can be seen on the following chart. 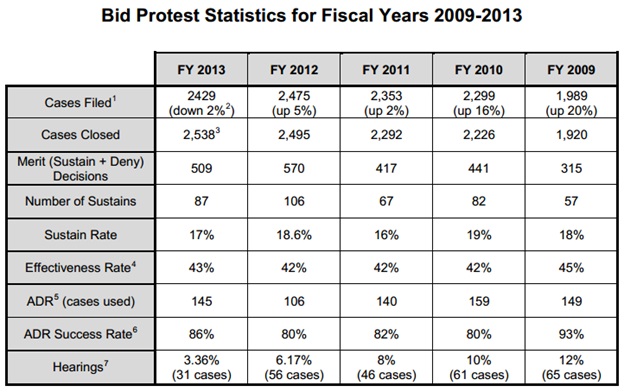 A copy of the complete GAO report can be accessed here: GAO Bid Protest Annual Report to Congress FY 13 – Jan. 2 2014