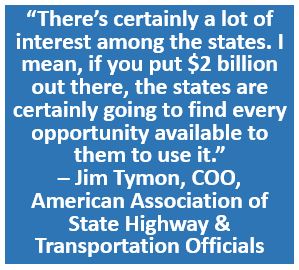 State transportation officials and construction contractors are eagerly awaiting word from the Federal Highway Administration (FHwA) about how the agency will parcel out to states an estimated $2.1 billion in earmarked but long-unused highway-project funds. FHwA should make its announcement this month, an agency official says.

The fiscal 2016 omnibus appropriations measure, signed into law on Dec. 18, directs FHwA to redistribute to states unobligated funds earmarked for highway projects in transportation legislation dating back at least a decade. For example, some of the earmarks were contained in the Transportation Equity Act for the 21st Century, which was enacted in 1998.

The appropriations law specifies that states must redeploy the funds on a project within 50 miles of the old earmarked one.

Keep reading this article at: http://www.enr.com/articles/38738-fhwa-expected-to-release-2b-in-old-earmarked-funds