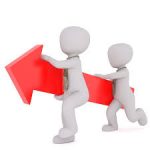 According to a Wall Street Journal analysis of state and local revenue collection and spending, public agencies are increasing their infrastructure investments and making a dent in projects that have been on back burners for many years.

A strong economy has resulted in an increase in consumer spending, and all that new tax revenue is helping to drive not only infrastructure spending but municipal borrowing as well. In fact, according to October 2018 data, the latest available from the Commerce Department, total state and local construction spending — based on a seasonal adjusted annual rate — was up 9.7% from October 2017 to more than $288 billion. Commercial construction was up the most year over year at 62%, followed by amusement and recreation (30%), water supply (22%), public safety (18%) and transportation infrastructure (15%). Tax revenue, adjusted for inflation, grew by 6% in the second quarter of 2018 from the second quarter of 2017, according to a Tax Policy Center report.

Year-to-date state and local government borrowing through October 2018 was up 19% from the same period in 2017, driven in part by a desire to take advantage of current interest rates in case they continue to increase. The pipeline of publicly funded construction projects, including those much-needed upgrades and repairs that have been shelved due to a previous lack of money, according to the newspaper, could make up for potential industry slowdowns.

Keep reading this article at: https://www.constructiondive.com/news/state-local-governments-using-higher-revenues-to-increase-infrastructure-s/544741/