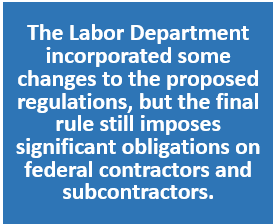 The Executive Order was originally signed February 12, 2014, and it permits the Secretary of Labor to adjust this amount each year.   The notice and an updated Worker Rights poster are available here.

Meanwhile, the rule effectuating Executive Order 13706, which requires certain federal contractors and subcontractors to provide their workers with up to seven days of paid sick leave annually, has completed the Office of Management and Budget (OMB) review process, according to Politico.

Under the rule as proposed, employees may use paid sick days for themselves, for a sick family member, or for absences related to sexual assault, domestic abuse, or stalking.

The Executive Order requires DOL to publish a final rule implementing the Order by September 30, 2016.

The U.S. Department of Labor (DOL) has signaled it intends to issue a final rule to fully implement the President’s July 31, 2014 “Fair Pay and Safe Workplaces” Executive Order by August 2016.  The Order creates disclosure and compliance requirements for contractors on federal contracts valued at $500,000 or more.  Per the proposed rules, contractors must disclose violations of labor, employment, wage payment and safety laws during the contract bidding and renewal process.  The last action taken on this regulatory matter was May 2, 2016 when revised implementing rules were sent to the Office of Management and Budget (OMB) for finalization.

DOL also plans to issue a final rule that will implement the “Establishing Paid Sick Leave for Contractors” Executive Order by September 2016. Under the rule being proposed, contractors will be required to provide up to 56 hours, or 7 days, of paid sick leave per year to their employees on federal contracts entered into after January 1, 2017.  Subcontractors also will be required to provide paid sick leave to employees performing work on a covered contract.  The comment period on this new requirement closed on April 12, 2016, so it is likely that the final steps of the regulatory process will be finalized year’s end.

The status of these two rules as well as others affecting employers may be found on the U.S. Department of Labor’s spring 2016 rule list published here. 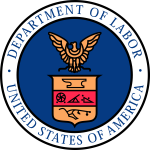 The latest in a string of presidential actions targeting employers that do business with the federal government is a new Executive Order (EO) that will require federal contractors to provide their employers with paid sick leave.  Signed on Labor Day 2015 and effective in 2017, the EO will permit employees working on federal contracts to earn at least one hour of paid sick leave for every 30 hours worked. 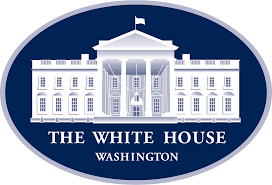 According to a White House fact sheet, the paid leave mandate will affect approximately 300,000 workers.

The White House also announced that the Department of Labor (DOL) will issue a final rule this week to implement Executive Order 13665, which adds pay transparency requirements to existing federal contractor obligations.  Specifically, this EO, signed into law on April 8, 2014, adds new prohibitions on discrimination based on the inquiry, discussion, or disclosure of pay.

Keep reading this article at: http://www.mondaq.com/article.asp?articleid=425662

In another in his stream of executive moves that don’t require congressional approval, President Obama used Labor Day and the ongoing presidential campaign to highlight his signing of an executive order requiring federal contractors to provide up to seven days sick leave for employees.

“We’ve seen that many companies, including small businesses, support these policies, because they understand it’s helpful with recruitment and retention,” Obama told a union crowd in Boston on Monday. Back in January’s State of the Union address, he had stated that, “We are the only advanced country on Earth that doesn’t guarantee paid sick leave or paid maternity leave to our workers. And that forces too many parents to make the gut-wrenching choice between a paycheck and a sick kid at home.”

The order, which would affect some 300,000 workers full- and part-time, would credit one hour of sick leave for every 30 hours worked, up to seven days annually. The time could be used to care for one’s self, a family member or domestic partner, including victims of domestic violence.

Because the order must still go through public comment, it won’t take effect until 2017 under new contracts, according to a White House fact sheet.

Keep reading this article at: http://www.govexec.com/contracting/2015/09/obamas-latest-executive-order-requires-sick-leave-contractors/120440