It has been a long time coming, but it appears that the government will (finally) amend the Federal Acquisition Regulation (FAR) to align with prior changes by the Small Business Administration (SBA) concerning credit for lower-tier small business subcontracting.

The propose rule addresses changes to FAR 19.704 and 52.219-9 to marry the regulation up with SBA’s amendments.

According to a report by the Federal News Network, the Department of Defense (“DoD”) is proposing a new rule which would change how it pays some defense contractors.  DoD is looking to require, whenever practicable, that fixed price contracts be paid out through performance-based contractual payments.  Performance-based payments are a method of contract financing where payments are made on the basis of the contractor’s achievement of objective, quantifiably measurable events, results, or accomplishments that are defined and valued in the contract prior to performance.  Some within the government consider it a preferred method of contracting and claim that it reduces the government’s oversight and compliance costs.  It also may have benefits for contractors, as it should help cash flow, reduce the cost of oversight and compliance, and allow the contractor to focus on technical and schedule progress.  Comments on the proposed rule are due by July 1.

Read the new rule at the Federal Register. 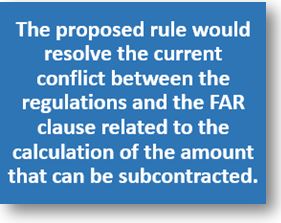 The Department of Defense (DoD) has issued a class deviation that resolves the inconsistency between the Small Business Administration (SBA) regulations and the clause at Federal Acquisition Regulation (FAR) 52.219-14 related to the Limitations on Subcontracting Rule (LOSR).

The FAR Council has also issued a proposed rule to amend FAR 52.219-14 to fully resolve this issue for all small businesses. Government contractors should be aware of these new changes and proposed changes.

Keep reading this article at: http://www.mondaq.com/article.asp?articleid=777544

By way of background, in June 2016, the U.S. Small Business Administration (SBA) issued a final rule changing its regulations regarding the limitations on subcontracting applicable to small business set-aside contracts. SBA’s amended regulations were promulgated in response to a directive in the 2013 National Defense Authorization Act (2013 NDAA) which required changes to how limitations on subcontracting requirements are quantified and which required inclusion of “Similarly Situated Entities” (SSEs) in the prime contractor’s portion of the work under set-aside contracts.

The contracting community has been anxiously awaiting an amendment to the FAR, which has been asserted to be necessary for these Congressionally-mandated changes to become effective.  On Dec. 5th, the DoD issued a Class Deviation which adopts SBA’s current approach to Limitations on Subcontracting. The Class Deviation is effective immediately and applies to all DoD solicitations and contract awards from that date forward.

DoD’s Class Deviation was issued in conjunction with a notice of proposed rule-making issued by the FAR Council, which proposes to amend the FAR’s Limitations on Subcontracting clause (52.219-14) to conform with the statutory requirement and SBA’s previously announced final rule.

Keep reading this article at: https://www.jdsupra.com/legalnews/dod-issues-a-limitations-on-58789/

See commentary about the limitations on subcontracting rule at: http://smallgovcon.com/statutes-and-regulations/limitations-on-subcontracting-far-council-finally-proposes-rule-change/

A newly-released Proposed Rule would create a procedure for the Dept. of Defense (DoD) to release unclassified technical data subject to Export Administration Regulations (EAR) and International Traffic in Arms Regulations (ITAR) to “qualified contractors,” which are defined to mean qualified U.S. and Canadian contractors.

For a brief summary of the process, the contractor certification requirement, the type of information subject to the rule, the disclosure limitations, and the issue of disqualification, click on this link: http://www.mondaq.com/article.asp?articleid=541556

On January 20, 2016, the FAR Council published a proposed rule calling for changes to the Federal Acquisition Regulation (FAR) Parts 19 and 52 that address payments to small business subcontractors. 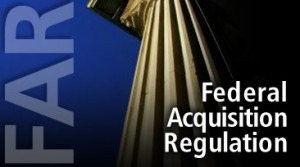 The proposed changes, which are intended to implement regulations adopted by the Small Business Administration (SBA) in 2013, will expand the range of small business-related obligations imposed on prime contractors.

The proposed rule stems from the Small Business Jobs Act of 2010, which, as noted in a previous post, called for regulations governing prime contractors’ compliance with their small business subcontracting plans. Among the Act’s requirements was that prime contractors notify their contracting officer if they pay a “reduced price” or make an “untimely payment” to a small business subcontractor.  Although the SBA adopted regulations implementing this statutory directive in July 2013, the Far Council is taking on the task for the first time.

Keep reading this article at: http://www.natlawreview.com/article/far-council-adds-new-layer-to-small-business-subcontracting-rules

The Small Business Administration (SBA) released an advance notice of proposed rulemaking (ANPR) on Friday, December 18, 2015, which would change the certification process for the Women Owned Small Business (WOSB) Program.  Public comments on SBA’s new rules are due not later than February 16, 2016.

In the 2015 version of the National Defense Authorization Act (NDAA), Congress directed the SBA to end self-certification for WOSBs and EDWOSBs and take on a formal certification process.  Section 825 of the 2015 NDAA specifically authorizes certification by a federal agency, a State government, SBA, or a national certifying entity approved by SBA.  In the ANPR, the SBA is seeking comments on how to best implement this Congressional directive.  In essence, the SBA is requesting the public to suggest the most appropriate way to structure the WOSB/EDWOSB certification process before SBA engages in a formal rulemaking process.

Four significant areas of change to the WOSB certification process are under consideration:

SBA’s ANPR is extremely relevant to all businesses currently self-certified as a WOSB or EDWOSB, as well as those who intend to pursue WOSB/EDWOSB certification in the future.  The ANPR, including instructions for commenting can be found at: https://www.gpo.gov/fdsys/pkg/FR-2015-12-18/pdf/2015-31806.pdf

In the Nov. 18, 2015 edition of the Federal Register, there’s a proposal to amend the Federal Acquisition Regulation (FAR) to re-designate the terminology for unique identification of entities receiving Federal awards. The change to the FAR would remove the proprietary standard or number; in this case, the the proprietary Data Universal Numbering System (DUNS®) number from Dun and Bradstreet.

The rule proposes to provide references to a web site where information on the unique entity identifier used for Federal contractors will be located.  The process for exploring non-proprietary alternatives to DUNS® will be led by the Office of Management and Budget and the Treasury Department, assisted by GSA and the Award Committee for E-Government.

“Although the government is not currently in a position to move away from use of the DUNS® number in the short term,” the notice states, “elimination of regulatory references to a proprietary entity identifier will provide opportunities for future competition that can reduce costs to taxpayers. The current requirement limits competition by using a proprietary number and organization to meet the identification need as well as the need for other business information associated with that number.”