Disruption is coming to the world of management consulting. Recently, I documented the many disruptive forces at work on the consulting business model. Cracks in the façade are showing, revealing a business model more fragile than agile. 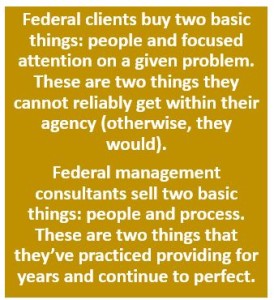 Many federal management consulting firms do, if fact, have a track record for responding to change — when things are good. But even with sequestration and budget cuts in recent years, things have still been pretty good. But change is coming.

Our business model is fragile. Two factors contribute to its fragility. First, there is a subtle but important disconnect today between what consultants are selling and what clients are buying. Second, as consultants gain experience, they aspire to spend less time with their federal clients—not more.

Keep reading this article at: http://about.bgov.com/blog/these-two-factors-explain-why-the-management-consulting-business-model-is-broken/

Keep reading this article at: http://www.nextgov.com/defense/2014/01/va-eyes-vet-owned-firms-management-contracts/77435/

The original sources sought announcement (february 2013) is at: https://www.fbo.gov/index?s=opportunity&mode=form&id=296cfbf4dd83ffafe2491b7ebfa12366&tab=core&_cview=1

deral procurement managers estimate they can save up to $158 billion annually by implementing more efficient acquisition processes and stronger program management training, according to a survey released on Monday.

Meritalk, an online community of government information technology specialists, canvassed 200 civilian, defense and private sector contracting professionals in January and found ample opportunities for cost savings. For example, 28 percent of federal programs are not delivered on time or on budget, respondents said. The governmentwide goal, as set by a 2004 Office of Management Budget memorandum, is 10 percent.

Managers suggested they could cut 30 percent from their annual procurement budgets through operation and system-level improvements. Specifically, the survey found more agencies should be using mandated project management methods such as earned value management, and capital planning and investment control.

“The White House is looking for 5 percent savings from agencies,” said Steve O’Keeffe, founder of MeriTalk. “Everyone is looking to save money, but we need to start by enforcing the rules and mandates that we already have.”

Agencies that consistently use the two techniques gave themselves high grades for the maturity of their acquisition processes. But, only 12 of all managers gave their agency procurement systems an “A,” with the majority settling for a “B” or “C,” the survey showed. The most frequent challenges officials outlined were process deficiencies, poor program management and inadequate staffing.

Another problem could be training. Nearly 60 percent of officials confessed to a lack of program management and earned value management training, while 85 percent said they were not schooled in capital planning and investment control.

At least one key lawmaker was troubled by the report’s findings. “The federal government must embrace efficiency as a means to not only save money, but also bring better service to the American people,” said Sen. Tom Carper, D-Del., chairman of the Senate Homeland Security and Governmental Affairs Subcommittee on Federal Financial Management, Government Information, Federal Services and International Security. “This report clearly outlines how — with more efficient management processes and better training of personnel — we can realize significant savings for American taxpayers.”

Last month, the Senate passed Carper’s Information Technology Investment Oversight Enhancement and Waste Prevention Act. The bill requires the Office of Management and Budget to provide quarterly public updates on the cost, schedule and performance of all major IT investments using earned-value management data. The bill has now been referred to the House.

The survey also indicated some mixed feelings among acquisition executives on two of the Obama administration’s top contracting priorities.

Only 36 percent of respondents said increasing the number of firm fixed-price contracts would improve program efficiency. Thirty-eight percent disagreed with the approach, in which officials set a price for the work at the outset to avoid ballooning costs, and 26 percent were undecided.

Half the contracting officials said they wanted to increase top-down transparency. But, most are not taking the plunge. Only 18 percent indicated that they were leveraging technology innovations, such as Web 2.0. And just 21 percent of officials said their agency encouraged citizen participation and actively responded to public inquiries.

“We need to begin to change our behavior and not just talk about it,” O’Keeffe said.