Wouldn’t this information be helpful if you are looking for subcontracting prospects?  Or when you’re trying to figure out who your competitors are?  Or when considering who might be a good partner on an upcoming bid proposal?

Each month, the Georgia Tech Procurement Assistance Center (GTPAC) publishes a list of federal contracts awarded to Georgia businesses.  The list comes complete with point-of-contact information on the awardees, the name of the awarding agency, the dollar value of the contract, and much more.

Winners of federal contracts earlier this year may be found at the links below:

For information on Georgia businesses that won federal contracts in 2013, click here.

Each year, DHS and other departments release data on their services contracting; the Office of Management and Budget in 2011 called on agencies to reduce services spending.

The newly released fiscal 2013 DHS inventory shows the department obligating $9.35 billion on services during that fiscal year with 16 percent of it dedicated to guard services.

Keep reading this article at: http://www.fiercehomelandsecurity.com/story/beltway-firms-dominate-dhs-services-contracting/2014-02-03 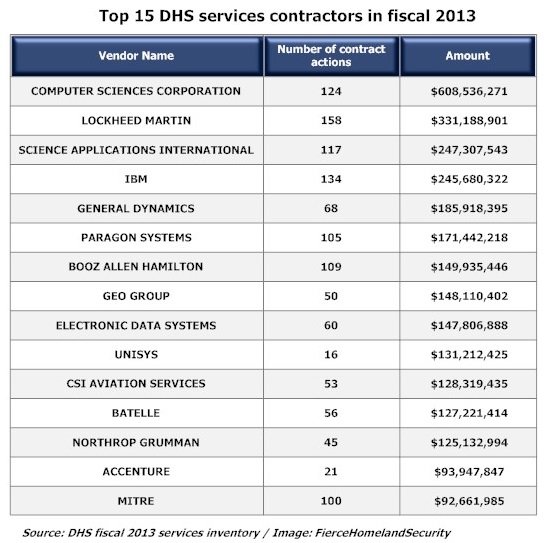 The Fort Gordon Post Exchange made possibly its strongest commitment Friday to its slogan, “You save. We give back.”

Using earnings from purchases made by a consumer base that includes 100,000 on- and off-post soldiers and retirees, the shopping complex broke ground on a $21 million project to renovate its nearly 20-year-old facility into a more spacious and modern retail center.

“Today is the realization of a plan that was initiated years ago, and we are finally seeing it come to fruition,” Maj. Gen. LaWarren V. Patterson, Fort Gordon’s commanding officer, said after digging the project’s ceremonial first clump of dirt.

Patterson said the project shows the faith and confidence that both the Department of Defense and the Army and Air Force Exchange Service have in the patronage of Fort Gordon’s Post Exchange.

At a time when U.S. military bases are using early retirement, natural attrition and hiring freezes to battle federal budget cuts and avoid layoffs at its trading posts and strip malls, Fort Gordon has been authorized to nearly double its facility in size from 98,000 to 177,000 square feet.

There’s a brand new resource available to you — free of charge — courtesy of the national community of procurement technical assistance centers (PTACs).

Braddock’s The Winning Edge: How Government and Corporate Buyers Select a Small Business Supplier – 2014 Edition is a practical guide designed for small to medium sized businesses that provides important insights into the decision-making process within the government and large corporations, with an emphasis on the evaluation and selection stages.

A special electronic edition of Braddock’s The Winning Edge is available at no charge to PTAC clients thanks to the generous support of Microsoft Corporation.  Download your free copy today by clicking right here.

We hope you find this resource useful.   As always, we at the Georgia Tech Procurement Assistance Center (GTPAC) stand ready to answer any questions you may have and help you take the next steps in your government contracting pursuits.

Wouldn’t this information be helpful if you are looking for subcontracting prospects?  Or when you’re trying to figure out who your competitors are?

Each month, the Georgia Tech Procurement Assistance Center (GTPAC) publishes a list of federal contracts awarded to Georgia businesses.  The list comes complete with point-of-contact information on the awardees, the name of the awarding agency, the dollar value of the contract, and much more.

Copies of earlier months are posted in an article here: http://tinyurl.com/qgl6jow.

March’s contract countdown includes a pair of major wins by one company, a $1.5 billion contract that cleared the protest hurdle and only two multiple award contracts.

For the month, Washington Technology covered 28 contract awards, compared to 21 in February and 40 in January.

So starting at No. 10, the March contract countdown begins with….

9. Harris wins delayed VA contract for $80.3M
Harris Corp. will be taking over the Veterans Affairs Department contract to create software for the agency’s integrated-electronic health records system, known as iEHR. The contract is worth $80.3 million

The original software contract awarded to ASM Research in January was canceled on Feb. 28 after a conflict of interest, and was reopened to the original bidders.

8. 8 bid on $93M Navy education-training contract
The Navy has selected eight contractors to provide education training products and services for the Naval Education Training Command under a cost-plus-fixed-fee, firm-fixed-price multiple-award contract with a maximum value of $97.3 million.
The winning contractors will compete to provide support and services to the Naval Education Training and Professional Development and Technology Center, which works to educate Navy sailors in a variety of ways.

The eight contractors are:

6. CSC wins $297M Maryland Medicaid upgrade
Computer Sciences Corp. will completely revamp Maryland’s Medicaid information system under an eight-year contract that has an estimated total value to $297 million. The contract from the Maryland Department of Health and Mental Hygiene calls for CSC to replace the state’s Medicaid Management Information System and to provide fiscal agent services for selected DHMH programs.

Each company has been awarded an indefinite-delivery, indefinite-quantity, firm-fixed-price supply contract for the procurement of commercial-off-the-shelf, network and communications equipment, and related incidental support services.

The contract winners are:

4. Northrop wins $504M Air Force job
Northrop Grumman Corp. will modernize the Air Force’s Air and Space Operations Center as the result of an eight-year contract that has a potential value of $504 million if all options are exercised. The Air and Space Operations Center Weapon System in Newport News, Va., is the command and control center for planning, executing and assessing joint air operations during contingency operations or conflict.

3. Xerox captures $848M cloud project
Xerox has won a nine-year, $848 million contract from the state of Texas to create secure cloud-based services by modernizing and consolidating its data centers. The upgrade will be one of the largest projects of its kind in the country.

1. Xerox takes over $1.6B Medi-Cal contract
Xerox wins a $1.6 billion contract to manage the processing of Medicaid claims in the state of California, which serves more than 7.5 million people. Xerox got into the Medicaid processing business with its acquisition of Affiliated Computer Services. It now processes claims in 12 states and the District of Columbia.

About the Author: Nick Wakeman is the editor-in-chief of Washington Technology. This article appeared on Apr. 9, 2012 at http://washingtontechnology.com/articles/2012/04/09/march-contract-countdown.aspx?s=EB?s=wtdaily

From a couple billion-dollar plus awards to intelligence support to cloud computing, we covered a variety of contract awards in January.

We count down the 10 biggest contract awards that hit the market in January. To qualify for our countdown contracts need to be publicly announced during the month and covered by Washington Technology. Some of the contracts may have been awarded before January, but were not publicly disclosed until that month.

We covered 40 contracts worth $9.1 billion during January and the top 10 contracts accounted for nearly $8 billion of the total. Half of the contracts in the top 10 are single awards, including the largest, while the rest have multiple winners. One contract is under protest.

Without further ado, our contract countdown starts with No. 10.

9. Planned Systems International takes on health codes worth $96M
The company will do systems analysis, code maintenance and administration for the Defense Health Services System. The work includes processes and methodologies for developing requirements, change controls and documentation.

The nine winners are:

4. 5 win $900M anti-IED contract
Under this contract, the companies will provide support to combat improvised explosive devices. The winners are:

And the largest contract award announced in January is…

1. Lockheed wins $2B contract for South Pole project
The company will modernize technologies to transport scientists, staff and supplies to and from the Antarctic region to support the U.S. Antarctica research program.

It should be noted that this contract is currently under protest.

Lockheed will work with the National Science Foundation in the multi-year contract to install a cost-effective streamlined infrastructure for managing the three work stations and medical facilities, research vessels, construction projects and remote sites in and around Antarctica.

About the Author: Nick Wakeman is the editor-in-chief of Washington Technology.   This article appeared on Feb. 17, 2012 at http://washingtontechnology.com/articles/2012/02/17/january-contract-countdown.aspx?s=wtdaily_210212.

Managed by the Air Force Materiel Command, DESP III is a follow-on IDIQ to DESP I and DESP II, and covers technology insertion, reliability and maintainability, deployability improvements, environmental and safety compliance, improvement of depot manufacturing and/or repair processes, and development of information management systems and process models.

The 26 named prime awardees are:

As with its predecessors, the DESP III contract vehicle is available to all other Air Force commands, Defense Department agencies including the Army, the Navy and the Marines, and by other government entities having similar systems or needs.

About the Author: David Hubler is senior editor of Washington Technology.  This article appeared Jan. 31, 2012 at http://washingtontechnology.com/articles/2012/01/31/af-desp-iii-winners.aspx?s=wtdaily_010212.