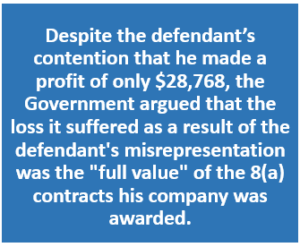 A new rule goes into effect Aug. 27, 2013 implementing a “presumption of loss” of the entire dollar value of any contract given to small businesses that  misrepresent their status.

The rule makes the basis of damages for a civil lawsuit equal to the value of the full  contract.

The government will consider any misrepresentation to be intentional after a  business registers itself as small in any federal database or submits a bid for  a contract as a small business.

The rule, which implements provisions from the 2010 Small Business Jobs Act, does limit liability in cases of unintentional error, technical  malfunction, “or other similar situations.” The Small Business Administration  found 200 firms that misrepresented their size in 2010.

Keep reading this article at: http://www.fiercegovernment.com/story/new-rule-implements-presumption-loss-over-small-business-misrepresentation/2013-07-08?utm_medium=nl&utm_source=internal