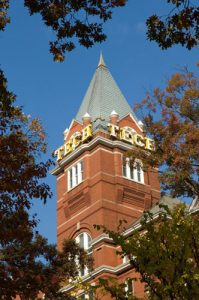 On August 5, the Office of the Executive Vice President for Research at Georgia Tech awarded a first round of grants meant to assist in the formation and advancement of cross-disciplinary research teams.

The grants come in response to shifting trends in national research and funding priorities.  Major funding agencies like the National Science Foundation (NSF) are increasing their support for large-scale, team-based projects, according to Georgia Tech faculty members Robert Butera and Devesh Ranjan.  Successful proposals for these projects often rely on integrating expertise from across disparate areas, including engineering, science, liberal arts, design, and business.

“A lot of cutting-edge science requires a team approach,” said Butera, who is also vice president for research development and operations.

Academic research faculty have historically worked within a narrower scope, according to Butera.  In particular, newer research programs have tended to be focused within one single discipline, with no more than one or two different faculty members involved.

Far larger projects are becoming more common.  One example is a $21.9 million DARPA-funded effort led by Phil Santangelo, professor of biomedical engineering, which seeks to develop gene-based therapeutics for flu and other viruses, including Covid-19.  That project directly involves vaccine manufacturers and a broad range of other collaborators.

“That’s a really huge research project,” said Butera.  “That’s a level of project management complexity and proposal development that faculty are [traditionally] not prepared for.”

The settlement agreement was announced on May 3, 2018.

The SBIR program is a set-aside program for small businesses.  The purpose of the SBIR program is to strengthen the role of small business concerns in federally funded research and development and to increase private sector commercialization.  To receive SBIR funds, each awardee of an SBIR Phase I or II award must qualify as a small business at the time of the award as well as throughout the duration of the award.  To be eligible, the small business and its affiliates collectively must have fewer than 500 employees.  According to the settlement agreement, the government alleged that MassTech, Arnold Lee, and Richard Lee falsely represented to the National Science Foundation (NSF), to NASA, and to the Dept. of Health & Human Services (HHS) that MassTech was an eligible small business concern at the time of the SBIR application as well as throughout the lifecycle of the award.  As a result, NSF, NASA, and HHS approved and funded SBIR awards to MassTech that MassTech otherwise would not have received.  MassTech, Arnold Lee, and Richard Lee denied the United States’ allegations.

The NSF’s I-Corps program — a boot camp that shows what it’s like to form a startup — helps NSF-funded researchers learn how to commercialize their findings and determine if a market actually exists for what they developed.

“I-Corps nodes support the national innovation ecosystem and help some of America’s brightest researchers test the commercial potential of their discoveries,” Grace Wang, acting assistant director for the NSF Directorate for Engineering, said in a statement. “We are thrilled to support these regional innovation hotbeds, which will help to foster local economic development and expand access to more researchers of all different backgrounds who seek entrepreneurship training.”

The grant, one of five the NSF awarded to schools across the country, supports innovation hubs called I-Corps nodes.

Because of its long experience with forming companies from university research, Georgia Tech — through its VentureLab incubator — was selected in 2012 to be among the first institutions to become “nodes” teaching the I-Corps curriculum. VentureLab is Georgia Tech’s technology commercialization incubator that primarily serves Tech faculty, staff, and students who seek to launch startup companies from the technology innovations they have developed.

“This effort underscores Georgia Tech’s economic development mission and commitment to creating the next generation of entrepreneurial problem solvers,” said Chris Downing, who is the I-Corps South Node’s principal investigator and vice president of the Enterprise Innovation Institute (EI2), Tech’s chief economic development and extension outreach arm. “Through our collective service efforts to entrepreneurs, business, researchers, and innovators, Georgia Tech and our partner schools in Alabama and Tennessee are working together to design a foundation of regional innovation in the Southeast.”

“Through this partnership, the I-Corps South Node has the potential to reach more than 500,000 graduate and undergraduate students, and many thousands of the nation’s research faculty at research universities and historically black colleges and universities across the Southeast and the island of Puerto Rico.”

NSF created the I-Corps program in 2011 and since then, more than 800 teams have completed the NSF curriculum, from 192 universities in 44 states. That’s resulted in the creation of more than 320 companies that have collectively raised more than $83 million in follow-on funding.

At Georgia Tech, more than 40 teams have finished the I-Corps program, leading to the creation of more than 20 spinouts that have collectively raised more than $4.5 million in follow-up funding.

VentureLab — ranked as North America’s No. 5 university-based startup incubator — is Georgia Tech’s technology commercialization program that provides comprehensive assistance to faculty, staff, and students who want to form startups. VentureLab helps those entrepreneurs turn their ideas into early-stage companies through business model development, making connections between the innovators and seasoned entrepreneurs, locating sources of early-stage financing, and preparing these fledgling startups for the business world. Since its 2001 founding, VentureLab — a program of the Enterprise Innovation Institute, Georgia Tech’s chief economic development arm — has launched more than 250 technology companies that have attracted more than $1.5 billion in outside funding. Visit venturelab.gatech.edu for more information. For additional information about I-Corps South, visit icorpssouth.com.