If you follow professional football, you are familiar with the message generally given to an aspiring player just before he is cut – “Coach wants to see you.  Bring your playbook.”  The playbook, that step-by-step guide to on-the-field success, is something that teams guard zealously.

Not all teams, however, maintain the secrecy of their playbooks, and the U.S. Government is a case in point.  The Government actually publishes its playbook of bargaining techniques recommended for its contract negotiators.  Like the Commandments Moses brought down from Mount Sinai, the Government playbook consists of 10 Rules.  These Rules can be found in Chapter 6 of Volume 5 of the DoD’s Contract Pricing Reference Guides.  The Rules are all reasonable and, in many ways, predictable.  Because “Forewarned is forearmed,” here they are… 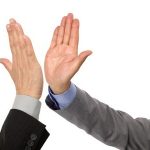 Negotiations can be a critical part of business.

A successful negotiation can help convince indecisive clients to take deals that benefit both them and your company; however, negotiations can also intimidate potential customers and cause them to back out of deals, even when they are in their best interest.

With this in mind, here are six negotiation strategies that can help put customers at ease and win their business.

Keep reading this article at: https://www.americanexpress.com/us/small-business/openforum/articles/6-negotiation-strategies-that-can-help-get-to-yes-fast/

For more interesting reading on the subject of contract negotiation, visit: http://gtpac.org/tag/negotiation/

When an agency decides to hold discussions with offerors, must it discuss with an offeror the price proposed for the contract? Not unless that offeror’s proposed price is so high as to be unreasonable.

As the GAO held in a recent bid protest decision, unless an offeror’s price is so high as to make its proposal unacceptable, the offeror is not entitled to be informed during discussions that its price is too high–even if the price is significantly higher than competitors.

The GAO helped shed light on this issue in Joint Logistics Managers, Inc., B-410465.2, B-410465.3 (May 5, 2015). There, the United States Marine Corps issued a task order RFP seeking “Care of Supplies in Storage” services in Albany Georgia, for one base year and one option year. The award was to be made on a best-value basis, considering technical approach, past performance, and price. Price was considered significantly less important than the combined non-price factors; but, price would become increasingly more important if proposals were considered technically equal or if an offeror’s price was so high as to diminish the value of any technical superiority.

Keep reading this article at: http://smallgovcon.com/gaobidprotests/when-too-high-isnt-high-enough/

Negotiation is a universal art, but many of us are surprisingly bad at it, especially those raised in cultures in which bargaining is not the norm. (I once participated in a panel on how to run a successful freelance business; at least half the audience confessed to almost never negotiating with their clients over rates.)

Even if you consider yourself an old hand at getting the best of your bargaining partner, I urge you to check out the Dec. 21 podcast of Planet Money. It’s about how to negotiate for things, especially when you’re Barack Obama and the US Congress and you’re trying to avert the fiscal cliff. I’ve distilled the lessons contained in that episode, plus a few from the literature, below.

Keep reading this article at http://www.govexec.com/excellence/promising-practices/2013/01/how-negotiate-anything/60422/?oref=govexec_today_nl.

Check out this valuable resource on negotiations located on the web site created by The Contracting Education Academy at Georgia Tech: http://contractingacademy.gatech.edu/2011/02/con-120-lession-6-negotiation-rules-bargaining-process/

Defense Department officials have told acquisition employees to fight for lower prices on contracts, even when there’s only one bidder.

In an April 27 memo, DOD officials gave more guidance to their acquisition offices on bargain for lower prices, as the department aims for more competition and lower spending in general. One area to find that savings is by negotiating lower prices from a contractor.

The initiative started last November, when defense officials told contracting officers to cancel a solicitation if it’s been in the market for less than 30 days and only one bid has come in. After the cancellation, they have to send out another solicitation for an additional month. If there’s still only one bidder, the contracting officer has to work to get a lower price than proposed.

Shay Assad, director for defense procurement and acquisition policy, wrote in the new memo that officers should not pay the contractor’s proposed price, even if the cost seems reasonable based on market research and having hosted a fair competition.

Instead, Assad wants officers to make sure the final price, which both sides agree to, is fair and reasonable in and of itself. He tells them to do careful analysis of the price and cost. Then the government needs to bring their analyses to the negotiating table to discuss pricing. Read the Federal Acquisition Regulation on contract pricing.

“I recognize that implementation of this policy may have the unintended consequence of increasing the contracting community’s workload, but given today’s scarcity of resources we need to ensure effective competition to the maximum extent possible,” Assad wrote at the end of the memo.

DOD officials have been under heavy pressure to make spending cuts. In 2010, Defense Secretary Robert Gates and Ashton Carter, undersecretary of defense for acquisition, logistics, and technology, issued a 23-point memo on acquisition reforms.

Competition for contracts is one of the key points of Gates and Carter’s reforms, along with controlling growth in costs, improving acquisition workforce’s know-how of buying services, and launching affordable projects.

— About the Author: Matthew Weigelt is acquisition editor for Federal Computer Week – posted at http://fcw.com/Articles/2011/04/28/Defense-Department-contract-competition.aspx?p=1 on Apr. 28, 2011.