The election of Donald Trump had a surprise impact on this month’s House-Senate conference meetings on the fiscal 2017 National Defense Authorization Act.

One of the main sticking points in the bill was whether to include House language on contractor “religious freedom” introduced in May by Rep. Steve Russell, R-Okla., which critics feared would allow contractors to fire LGBT employees protected under a 2014 executive order from President Obama.

But senior Senate Armed Services Committee aides told reporters Tuesday that “since the election, other paths have opened up” for addressing that executive order and the “Fair Pay and Safe Workplaces” rule, which contractors have opposed. The bill’s language on religious freedom and fair pay has therefore been removed from the compromise bill.The [National Defense Authorization Act] was always an imperfect remedy,” the aides said the night before the long-awaited conference report and merged bill were set to be posted.

Keep reading this article at: http://www.govexec.com/contracting/2016/11/defense-bill-stripped-language-overturning-contractor-executive-orders/133512/ 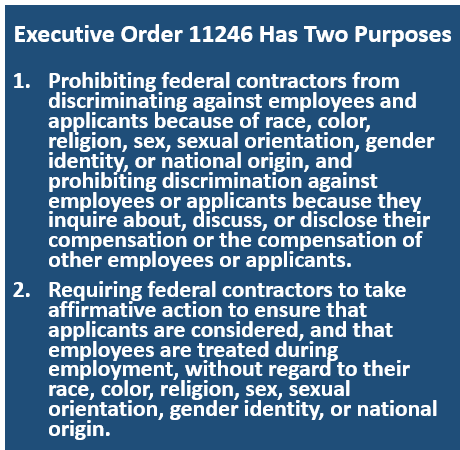 The final rule updates existing anti-discriminatory guidelines already on the books to include sexual orientation and gender identity and explains contractors’ obligations and potential costs related to implementing the amended Executive Order 11246, which President Obama issued in July 2014. The original E.O., issued by President Lyndon B. Johnson in the 1960s, prohibited federal contractors from discriminating against any employee or applicant for employment because of race, color, religion, sex or national origin. Obama updated it to include the language related to LGBT employees and applicants, and added protections against retaliation for employees who openly discuss or disclose compensation.

The E.O. applies to federal contractors and subcontractors who do more than $10,000 in business with the government in one year.

Keep reading this article at: http://www.govexec.com/contracting/2016/06/federal-contractor-guidance-prohibiting-lgbt-discrimination-arrives-amid-heated-congressional-debate/129070

The order prohibits federal contractors from discriminating on the basis of sexual orientation or gender identity in federal employment, and prohibits all companies that receive a contract from the federal government from discriminating against their LGBT employees, says an Office of Federal Procurement Policy (OFPP) statement.

“Citizens expect contracting professionals to provide these services on a superior scale while serving as responsible business models with respect to 21st century workplace equality,” says OFPP Administrator Anne Rung in the statement.

Keep reading this article at: http://www.fiercegovernment.com/story/order-banning-federal-contractor-lgbt-workplace-discrimination-goes-effect/2015-04-08