The stolen information includes secret plans to develop a supersonic anti-ship missile to be used by submarines by 2020, American officials told the Post.

The incidents took place in January and February, but officials did not disclose the contractor that was targeted, the newspaper reported Friday.

Although the information was highly sensitive, it was housed on the contractor’s unclassified network, according to the Post.

“Per federal regulations, there are measures in place that require companies to notify the government when a ‘cyber incident’ has occurred that has actual or potential adverse effects on their networks that contain controlled unclassified information,” Navy Lt. Marycate Walsh said in a statement. “It would be inappropriate to discuss further details at this time.”

Keep reading this article at: http://wtkr.com/2018/06/08/wapo-chinese-government-hackers-steal-massive-amounts-of-data-from-navy-contractor-computers/

Russian developers did some of the coding work for a Defense Department software system and stored that code inside a server in Moscow, according to a non-prosecution agreement released Monday.

Those Russian coders only worked on unclassified portions of the Defense Information Systems Agency project, but, in some cases, knew they were helping to develop a highly sensitive system that would attach to Defense Department information networks, according to the agreement between the Justice Department and Netcracker Technology Corp., the subcontractor that hired the Russian coders.

The non-prosecution deal ends a criminal investigation against Netcracker that was led by the Justice Department’s national security division and the U.S. Attorney’s Office for the Eastern District of Virginia.

Keep reading this article at: http://www.nextgov.com/cybersecurity/2017/12/company-used-russian-coders-pentagon-project-strikes-deal/144466/

Shandarrick Barnes has pleaded guilty to obstructing justice in the federal corruption investigation involving City of Atlanta government.  The defendant threw a concrete block through the window of E.R. Mitchell’s home, and placed dead rodents on his porch and elsewhere hoping to thwart his cooperation with federal law enforcement.

“Barnes threw the concrete block through Mitchell’s dining room window to get him to ‘shut up,’” said U. S. Attorney Byung J. “BJay” Pak.  “Instead, that violent act made Mitchell even more resolute in his cooperation with federal law enforcement.  Barnes now faces a significant prison sentence because he decided to obstruct a federal investigation.”

“Attempts to subvert justice, whether through intimidation of witnesses or by any other means, will not be tolerated.  The FBI will expend any resources necessary to ensure that those who seek to obstruct criminal investigations are held accountable for their actions.  This plea by Shandarrick Barnes is evidence of the FBI’s commitment to protect those willing to cooperate with law enforcement’s efforts to improve their communities,”

“Individuals who obstruct justice will be held accountable for their actions. Intimidation of witnesses is never acceptable,” said James Dorsey, Acting Special Agent in Charge, IRS Criminal Investigation.  “This investigation was complex and multifaceted, and it underscores the reason we are committed to working with our law enforcement partners to dismantle any and all public corruption schemes.”

According to U.S. Attorney Pak, the charges, and other information presented in court:

Sentencing for Shandarrick Barnes, 41, of Atlanta, Georgia, is scheduled for February 7, 2018.  This case is being investigated by the Federal Bureau of Investigation.  Assistant U.S. Attorneys Kurt R. Erskine and Jeffrey Davis are prosecuting the case.

The former chief operating officer and co-owner of now-defunct Schuylkill Products Inc. will spend 10 fewer months in prison, but pay the same fine, after being resentenced Wednesday in federal court in Harrisburg, Pennsylvania for his role in the largest fraud of its kind in U.S. history.

Rambo originally sentenced Fink on July 14, 2014, to 51 months in prison and $25,100 in fines after he pleaded guilty to participating in Schuylkill Products’ scheme to defraud the federal Disadvantaged Business Enterprise (DBE) program.

Federal prosecutors charged Fink and several other Schuylkill Products executives with using Marikina Engineers and Construction Corp., West Haven, Connecticut, as a front under the DBE program from 1993 until 2008 to funnel work to the Cressona company and its wholly owned subsidiary, CDS Engineers Inc.

Keep reading this article at: http://republicanherald.com/news/schuylkill-products-co-owner-resentenced-to-10-fewer-months-in-prison-1.2011402

See our earlier articles on this case:

Despite improvements to its verification process and customer service, the Department of Veterans Affairs (VA) remains behind in efforts to improve its program for helping veteran-owned small businesses. 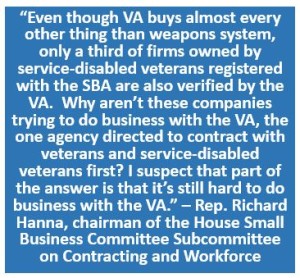 Testifying before a joint House subcommittee hearing Nov. 4, Tom Leney, executive director of the VA’s Office of Small and Disadvantaged Business Utilization, shared a status update on what’s been done to address problems with the Veterans First contracting program —but lawmakers were critical of the amount of progress that’s been made since the last report.

“VA has made substantial progress in improving the verification program since the last [Government Accountability Office] report of 2013,” Leney said. “In February 2015, GAO began its newest audit of the program. In short, by the end of [fiscal] 2015, applications were being processed within the regulatory time frame 99.8 percent of the time with an approval rate of 94 percent. Initial applications were processed in an average of 41 days, well below the regulatory target of 60 days.”

VA has also started conducting post-verification audits to monitor ongoing compliance, Leney said, and the Center for Veterans Enterprise has established a process for responding to fraud allegations and conducting investigations.

Keep reading this article at: http://federalnewsradio.com/hearingsoversight/2015/11/vas-small-business-program-still-faces-serious-problems/

Every Halloween, the cute traditional images re-emerge from our closets and the attics.  Ghosts, gravestones, plastic pumpkins, and perhaps the most common of all – skeletons.  Given the recent heightened status of Disadvantaged Business Enterprises (DBE) fraud prosecutions, the massive civil penalties, the prevalence of hotlines, and increased incentives for whistle-blowers, any contractor who participates in DBE programs should use Halloween as an annual reminder to take a closer look to see if they have other skeletons in their corporate attics.

According to recent government reports and audits, DBE fraud investigations have been on the rise, in hopes of deterring widespread abuses in the programs.  According to a 2011 report from the DOT, between 2003 and 2008, the Office of Inspector General (OIG) investigations resulted in 49 indictments, 43 convictions, nearly $42 million in recovery and fines, and 419 months of jail sentences.  Moreover, from 2009 and 2010, the number of DOT investigations increased by almost 70 percent.  Based upon the headlines each month, the number of indictments keeps climbing, along with the civil and criminal penalties.

In view of these statistics and trends, one thing should be crystal clear. To the extent that DBE compliance may be a challenge, it is far better to discover the problems sooner, rather than later.

Keep reading this article at: http://www.jdsupra.com/legalnews/got-dbe-fraud-skeletons-32884/

Keep reading this article at: http://www.jdsupra.com/legalnews/government-contracting-the-false-claims-78363/

The U.S. Attorney’s Office for the Middle District of Pennsylvania announced on January 13, 2014 that Dennis F. Campbell, of Orwigsburg, Pennsylvania, and Timothy G. Hubler, of Ashland, Pennsylvania, were sentenced by the Senior U.S. District Judge Sylvia H. Rambo in Harrisburg in connection with their roles in what the U.S. Department of Transportation (USDOT) has called the largest Disadvantaged Business Enterprise (DBE) fraud in the nation’s history.

Fink pleaded guilty to DBE fraud in 2010. Nagle was convicted after a four-week jury trial in 2012 of 26 charges relating to the DBE fraud scheme. No sentencing date has been scheduled for Fink and Nagle.

“The sentences handed down today, in what is the largest reported DBE fraud case in USDOT history, serve as clear signals that severe penalties await those who would attempt to subvert USDOT laws and regulations,” said Doug Shoemaker, OIG Regional Special Agent in Charge. “Preventing and detecting DBE fraud are priorities for the Secretary of Transportation and the USDOT Office of Inspector General. Prime contractors and subcontractors are cautioned not to engage in fraudulent DBE activity and are encouraged to report any suspected DBE fraud to the USDOT-OIG. Our agents will continue to work with the Secretary of Transportation; the administrators of the Federal Highway, Transit, and Aviation Administrations; and our law enforcement and prosecutorial colleagues to expose and shut down DBE fraud schemes throughout Pennsylvania and the United States.”

According to U.S. Attorney Peter J. Smith, the DBE fraud lasted for over 15 years and involved over $136 million in government contracts in Pennsylvania alone. SPI, using Marikina as a front, operated in several other states in the Mid-Atlantic and New England regions. Although Marikina received the contracts on paper, all the work was really performed by SPI personnel, and SPI received all the profits. In exchange for letting SPI use its name and DBE status, Marikina was paid a small fixed-fee set by SPI.

The scheme lasted as long as it did because of the numerous fraudulent steps the co-conspirators took to conceal the scheme. SPI personnel routinely pretended to be Marikina personnel by using Marikina business cards, e-mail addresses, stationery, and signature stamps, as well as using magnetic placards and decals bearing the Marikina logo to cover up SPI’s logo on SPI vehicles.

SPI and its wholly owned subsidiary, CDS Engineers, was sold in 2009 and was based in Cressona, Pennsylvania. SPI manufactured concrete bridge beams, as well as other suppliers’ products. CDS was SPI’s erection division and installed SPI’s bridge beams, as well as other suppliers’ products. USDOT provides billions of dollars a year to states and municipalities for the construction and maintenance of highways and mass transit systems on the condition that small businesses owned and operated by disadvantaged individuals receive a fair share of these federal funds. The DBE fraud here involved SPI’s use of Marikina’s name and status to obtain DBE contracts that it was not entitled to receive.