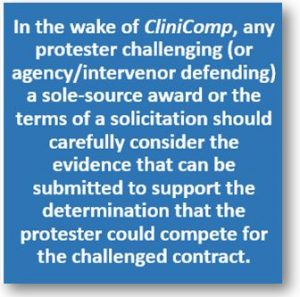 A protester must have a genuine stake in the government decision it hopes to challenge. Protesters do not have standing to challenge procurements they cannot hope to perform. There is friction, however, between the need for courts to consider the standing of protesters (e.g., their ability to perform a challenged contract) and the exclusive authority of the procuring agency to perform evaluations. The Federal Circuit’s Sept. 19, 2018 decision in CliniComp provides an illustration of this friction.

In CliniComp International Inc. v. U.S., the protester challenged a proposed sole-source award of a national electronic health records contract by the U.S. Veterans Administration to a much larger competitor. The Federal Circuit affirmed the underlying quasi-evaluation by the U.S. Court of Federal Claims decision, which compared CliniComp’s current operations with the details of the proposed sole-source contract. The Federal Circuit upheld the COFC’s finding that CliniComp did not have standing, as it had not shown itself to be capable of performing a national contract much larger than any of its current efforts.

While the decision is technically limited to protests challenging sole-source awards, the opinion could be read to suggest that even protesters challenging the terms of a solicitation may need to submit significant evidence at the outset of a protest to demonstrate that they could credibly propose to perform the full scope of work contemplated by the agency. Practitioners should take heed of the potentially critical importance of this threshold showing.

Keep reading this article at: http://www.mondaq.com/article.asp?articleid=740592

You just learned your company is one of several winners of a multiple-award IDIQ contract.  You also learned one of your competitors, which should have been ineligible, is also an awardee.  So, as things stand, you’ll have to split the contract — and compete for orders — with that competitor.

Can you file a protest challenging the improper award to your competitor?  Until last week, the answer was “no.”  Now the answer is “maybe” — but only if you go to the Court of Federal Claims (COFC).

To pursue a protest, the protester must establish that it is an interested party, by showing that (1) it is an actual or prospective offeror; and (2) its direct economic interest would be affected by the award of, or failure to award, the contract in question.  (31 U.S.C. § 3551(2)(A); 4 C.F.R. § 21.0(a)(1))  Since its decision in Recon Optical, Inc., et al., B-272239, July 17, 1996, 96-2 CPD ¶ 21, GAO has consistently held that winners of multiple-award IDIQ contracts are not interested parties for purposes of a protest, but it has typically done so while implying that, in rare circumstances, an awardee might be able to show it has an economic interest sufficient to make it an interested party.

GAO’s most recent decision, however, articulated what appears to be a categorical prohibition on awardee protests.

Keep reading this article at: https://www.insidegovernmentcontracts.com/2016/05/hope-for-awardee-protesters/