The United States Department of Transportation’s (DOT) Office of Small and Disadvantaged Business Utilization (OSDBU) is inviting small businesses to participate in a webinar on the Department’s Small Business Innovation Research (SBIR) Program.  The webinar will be held on Thursday, March 28, 2019 at 2:00 pm (EDT).

Here’s what participants will learn:

U.S. DOT’s SBIR program has awarded $50 million during the past five years to small businesses. Webinar participants will be able to hear from U.S. DOT SBIR program managers about their agency’s research needs and how they use the SBIR program.

Please confirm your participation by registering clicking this link: https://www.surveymonkey.com/r/QGFYB9Q no later than COB Monday, March 25, 2019.   By close of business Tuesday, March 26, 2019 registrants will receive an email communication with instructions on how to join the webinar.

U.S. DOT’s SBIR Program Director Rachael Sack, along with the FHWA R&T Program Development & Partnership Team Director Jack Jernigan, and FRA SBIR Program Manager Jeffrey Gordon, will be in attendance.  Please make your reservation through the link above as space is very limited. 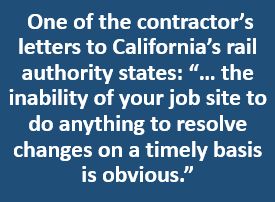 Others modest government awards followed from the Secret Service, National Credit Union Administration and Office of the Currency.

Martin said she quickly realized that, like commercial entities, many federal agencies had websites that were not in sync with their mission statements. Also, activities such as direct mail, trade show appearances and ad campaigns also were disjointed because each operation was the responsibility of a different domain.

So for the government market, she said, “Our very ambitious goal was ‘make the message matter.’ Whether it was online, offline, we wanted to make the message consistent.”

LeapFrog’s big leap into the government arena began in 2008, when the Federal Emergency Management Agency set aside its marketing and communications contracting as a small-business award.

Following Hurricane Katrina and other ensuing natural disasters, FEMA managers in 2010 decided they needed a public campaign to publicize how citizens could protect their homes and possessions from flood damage through government-sponsored insurance.

“We’d been watching for [the RFP] for a while,” said Mark Nelson, LeapFrog’s business development and communications manager, who joined the company in 2010.

“Our challenge was putting together a strong proposal in response to the RFP and corralling all the [partner] elements,” he said. “For example, we don’t do large-scale media buying so that’s why we enlisted Spurrier Media Group out of Richmond.”

And although LeapFrog does some web design, it doesn’t do the more complex back-end coding that is required, so it brought in Blue Water Media as a partner.

This past March the LeapFrog-led team won the five-year, $75 million FEMA contract to publicize and market government-sponsored flood insurance under the National Flood Insurance Program.

Among other tasks, LeapFrog manages the FEMA website FloodSmart.gov and collates the data from the agency’s call center queries.

“If you go to FloodSmart.gov, you can type in your address it will show you what your [flood] risk level risk is and give you a ballpark figure of what a policy would cost,” Nelson explained.

“FEMA actually has done a really good job,” he said. “They’re in the process of redoing a lot of the flood maps around the country using more digital and interactive tools.” Martin’s team also is tasked with spreading the word about FEMA’s flood insurance assistance through trade shows and by disseminating information to local officials, insurance companies, contractors and others.

LeapFrog Solutions is leveraging its work with FEMA at other government assistance agencies including the Homeland Security, Health and Human Services and Interior departments as well as the Office of Personnel Management.

“We’re also working at VA because of all the health care initiatives; also the military heath care system under DOD,” Martin said.

As a result of the FEMA award and its other government and commercial contracts, LeapFrog Solutions has grown to about 25 employees and the company, which began in Martin’s basement in 1996, will be moving into new, larger offices within the next few months.

“We’ve probably doubled [the staff] within the past two years,” she said. “As we’re growing, one of the things that we’re finding is that communications really need to be more and more refined.”

She said the advent of new social media and the growth of a tech-savvy government work force require companies like LeapFrog to be up on the latest technologies and be able to communicate their benefits. That includes keeping abreast of what the young generation of government workers wants and needs, she added.

“There’s a huge opportunity there,” she said, citing new opportunities at VA, HHS and NIH, where LeapFrog has secured a blanket purchase agreement.

But “it’s not enough just to be able to build and maintain a website. If you have a solution, you really have to show results,” she said. “When we go into an agency, we’re looking at what we can measure. What gets measured gets results.”

About the Author: David Hubler is senior editor of Washington Technology. This article was published Dec. 19, 2011 at http://washingtontechnology.com/Articles/2011/12/19/LeapFrog-FEMA-contract.aspx?s=wtdaily_201211&p=1.