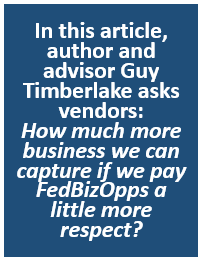 Marketing is a valuable tool that can do wonders to help an organization achieve its goals. For companies focused on selling goods and services to government agencies and other government contractors, creating targeted and robust awareness of why they matter and how they can help are critical.

There are times, however, when marketing is not a friend to government contractors.

One of those times is when a company has achieved the “holy grail” of opportunity development: being in front of the opportunity and having connected the dots of information and relationships with the budget, need and authority dots. What would cause a company to consider marketing an adversarial activity in that situation? When the agency determines a need to “market” the opportunity to seek interest from other potential vendors.

Let’s face it, if you’ve spent time and money developing the opportunity to include influencing the solution, pricing and acquisition strategy, you are not going to be a fan of letting others try and take a bite of that apple, right?

Keep reading this article at: http://publicspendforum.net/fedbizopps-respect/

The number of federal agency Sources Sought Notices for small businesses appears to have increased dramatically in recent years.

Sources Sought notices for small businesses referenced on the Federal Business Opportunities website FBO.gov rose to 2,610 in fiscal 2014, more than quadruple the 565 counted in fiscal 2004, according to an analysis by Set-Aside Alert.

That is good news for small business owners, because they are often advised to search for, and respond to, Sources Sought Notices that match their capabilities in order to get a foot in the door early in the process as opportunities are developing.

“We are seeing an explosion in Sources Sought Notices,” Gloria Larkin, government contracting consultant and president of TargetGov, said at a recent industry conference for small business federal contractors.

Keep reading this article at: http://www.setasidealertnews.com/leading-stories.html

If one type of FedBizOpps search does not turn up a solicitation, try a different search – or run the risk of missing the solicitation.

That is the message to contractors from a recent GAO bid protest decision, in which an offeror was unable to discover a VA opportunity by searching the “Place of Performance” field on FedBizOpps.  As it turned out, the solicitation would have popped up if the offeror had tried other types of FedBizOpps searches, and the GAO held that it was the offeror’s responsibility to more thoroughly attempt to locate the solicitation.

In The Creative Mobility Group, LLC, B-410380.2 (Dec. 19, 2014), the VA issued a request for quotations for home medical equipment services for patients of Veterans Integrated Service Network 11 medical facilities in Michigan, Indiana, Ohio, and Illinois.  The VA posted the opportunity on the FedBizOpps website.

Keep reading this article at: http://smallgovcon.com/gaobidprotests/fedbizopps-searches-be-thorough-or-be-out-of-luck/

The Homeland Security Department’s research and development arm recently released a pre-solicitation notice to small businesses regarding the potential development of innovative technologies from forensics to cybersecurity to wearable communications.

The Science and Technology Directorate released the joint pre-solicitation with the Domestic Nuclear Detection Office, or DNDO, which is also part of DHS, through its Small Business Innovation Research, or SBIR, program. It focuses on nine areas, including seven for S&T and two for DNDO.

The program began accepting proposals starting Dec. 18, according to FedBizOpps.

“While we want to stimulate innovation to meet the needs of the homeland security enterprise by having offerers submit proposals that concentrate on proving the scientific and technical feasibility of their ideas, they must consider the commercialization potential of their proposed effort,” Lisa Sobolewski, S&T’s SBIR program director, said in a statement.

Keep reading this article at: http://www.fiercehomelandsecurity.com/story/dhs-seeks-help-small-businesses-develop-security-related-solutions/2014-12-11

When I started writing up a post about a new alternative to FedBizOpps — the intimidatingly clumsy government website for contracting notices — I actually got distracted by it.

The new site was created by GovTribe, a four-man team of former federal contractors that aims to make it easier to track “projects, competitors, agencies, contracting officers and much more.”

(These are the guys who brought us a popular but infuriating list of “annoying” Department of Homeland Security contracting officers and a ranking of agencies whose contract awards are most often protested.)

Keep reading this article at: http://www.nextgov.com/emerging-tech/emerging-tech-blog/2014/10/new-way-find-federal-contracting-information/96584

The SBA is hosting a webcast that will consist of a live demo of three primary federal market research tools to help identify potential contracting opportunities.

A call-in number and access code will be emailed to registrants prior to the scheduled webcast.

Companies have protested more Army contract awards in the last 18 months than any other Defense Department agency’s awards, and the Veterans Affairs Department tops the list as the most protested non-Defense agency, according to an analysis by the open data supporters at GovTribe.

The Government Accountability Office, meanwhile, is researching electronic docketing systems to simplify and organize  the process of protesting contract awards.

Between September 2012 and May 13, the Army posted more than 12,000 contract award notices on the Federal Business Opportunities website and received 891 protests. That’s a 7 percent protest rate, GovTribe said, noting that some awards are protested more than once and not all protests are public, so the statistic may be misleading.

VA had a 6 percent protest rate by the same measure, with more than 400 protests. The Homeland Security Department was the next protested non-Defense agency, with fewer than 250 protests. The analysis did not include a percentage rate for DHS, and GovTribe declined to provide one.

Keep reading this article at: http://www.nextgov.com/cio-briefing/2014/05/why-are-so-many-army-and-va-contracts-protested/84589

The General Services Administration (GSA) unveiled tools that they say will simplify the process for small businesses to find contracting opportunities.

The initiatives were part of a May 9 program showcasing the agency’s 18F team – a lab of developers and designers from both inside and outside the government working together to build digital services that will be used across agencies.

GSA says one of those services will help small businesses search for contracting opportunities. FBOpen acts as a website where businesses can search available federal contracts and grants across all federal platforms.

Since FBOpen was unveiled, 1,750 users have queried it 50,000 times, said Presidential Innovation Fellow and 18F developer Aaron Snow at the event.

Keep reading this article at: http://www.fiercegovernment.com/story/gsas-18f-lab-brings-registration-tracking-sam-demos-fbopen/2014-05-11

While most documents generated by the government have made the transition from paper to digital, there are still a few hiccups in the process, notably contracts and other documents that require signatures.

The General Services Administration is looking for an agency-wide service that can obviate the need for pen-and-ink signatures and move the contracting process entirely online, according to documents posted on April 28, 2014. GSA now uses a variety of procedures to obtain signatures, some of which include a mix of electronic and pen-and-ink, or what the agency calls “wet” signatures. Transitioning fully to digital signatures would raise GSA’s efficiency and reduce costs, the agency said.

The document, posted on the Federal Business Opportunities Contracting site, is a sources sought notice, which means GSA wants to gather feedback from industry about possible products but isn’t seeking bids yet. The agency expects to issue a formal solicitation and award a contract before the end of 2015, the notice said.

Keep reading this article at: http://www.nextgov.com/emerging-tech/2014/04/gsa-wants-contractors-sign-digital-line/83236

The System for Award Management (SAM) is operational but it’s not what the future of acquisition systems should look like, said Sonny Hashmi, chief information officer at the General Services Administration (GSA).

“It is still inelegant and cumbersome. We have done just enough to make it operational,” said Hashmi during an April 11 chat on GitHub.

Shortly after the system went live, SAM ran into a variety of problems that required the back-end security architecture, business process management layer and database schema to be completely reconfigured.

Keep reading this article at: http://www.fiercegovernmentit.com/story/sam-inelegant-and-cumbersome-says-gsa-cio/2014-04-16

Don’t pay anyone to register your company in SAM.  SAM registration is free!  For details, please visit: http://gtpac.org/sam-gov-registration-is-free-and-help-with-sam-is-free-too