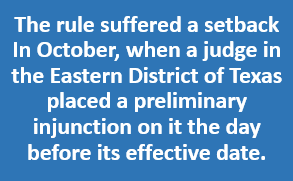 President Donald Trump on Monday signed a joint resolution shutting down an Obama administration-era rule that supporters said evened the playing field for law-abiding contractors, but which the current administration said amounted to “blacklisting” easy targets.

House Joint Resolution 37 stated that Congress “disapproves” the Fair Pay and Safe Workplaces rule  and “such rule shall have no force or effect.”

H.J. Res. 37 was part of a package of resolutions signed March 27 by President Trump, which “roll back job killing rules,” said White House Press Secretary Sean Spicer during a press briefing earlier in the day.

Keep reading this article at: http://federalnewsradio.com/industryassociations/2017/03/trump-signs-joint-resolution-to-roll-back-blacklisting-rule-for-federal-contractors/ 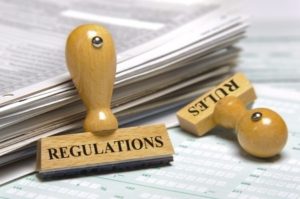 House joint resolution 37, sponsored by Rep. Virginia Foxx, R-N.C., declares that the implementation rule submitted in August by the Defense Department, General Services Administration, and NASA relating to the Federal Acquisition Regulation (FAR) has no effect.

It passed 236-187 amid a series of votes using the 1996 Congressional Review Act to nullify regulations enacted in the past 60 days. (Other rules involved streams protection, land management royalties and Social Security rules on gun purchase background checks for people with mental disabilities.)

“We welcome the House action,” said David Berteau, president and CEO of the 400-member Professional Services Council, in a statement. “The blacklisting rule fails to provide companies with basic due process, imposes significant new and non-value added reporting requirements, and risks denying federal buyers access to the best private-sector providers to meet government needs. With the disapproval of this rule by the House, and we hope with prompt action by the Senate and then signature by the president, a significant overhang will be removed from the acquisition process.”

Keep reading this article at: http://www.govexec.com/contracting/2017/02/contractors-applaud-house-vote-kill-obama-fair-pay-safe-workplace-rule/135140

On December 7, the Office of Management and Budget, the Department of Labor, and the Office to Monitor and Combat Trafficking in Persons in the Department of State, issued a proposed memorandum titled “Anti-Trafficking Risk Management Best Practices & Mitigation Considerations.”  The document is intended, at least in part, to “promote clarity and consistency in the implementation of anti-trafficking requirements” imposed by Executive Order 13627, Title XVII of the FY 2013 National Defense Authorization Act, and the implementing regulatory provisions applicable to all federal contractors at FAR 22.17 and FAR 52.222-50.

Although the guidance document is in draft form, it is important for contractors to consider closely because it: (1) outlines the government’s contemplated expectations on anti-trafficking risk mitigation, and (2) informs agencies that they may immediately take the contents of the memorandum “into consideration in applying the anti-trafficking requirements in the Federal Acquisition Regulation (FAR).”

In addition to reiterating the basic requirements of the anti-trafficking FAR rule (which we have covered in other posts), the memorandum outlines a series of “best practices and mitigation considerations” designed to inform contracting officers’ assessments of whether contractors are effectively carrying out their compliance responsibilities.  Although the guidance states that it is “not intended to augment or otherwise change existing regulatory requirements,” it does specify that, in the event the government becomes aware of a trafficking violation, a contractor’s compliance with the practices identified in the guidance are to be construed as mitigating considerations weighing in the contractor’s favor.

Keep reading this article at: https://www.insidegovernmentcontracts.com/2016/12/new-guidance-contractor-risk-management-human-trafficking-rule-released/

Among the many Obama administration regulations that President-elect Trump plans to eviscerate could be the “Fair Pay and Safe Workplaces” rule the Labor Department finalized in August.

Labor’s goal was to protect workers against abuses such as wage theft and health violations by instituting additional disclosure and reporting requirements for federal contractors concerning their compliance with 14 labor laws. Industry viewed the impact as a burdensome “blacklisting” of contractors whose reputations, in some cases, could suffer from unproven allegations of past worker abuse.

In October, a Texas district judge issued a preliminary injunction blocking parts of the rule in response to a suit brought by a chapter of the Associated Builders and Contractors. The judge decided that the rule’s reporting requirements reach beyond executive authority and are otherwise preempted by federal labor laws. She left only the paycheck transparency provisions intact to take effect Jan. 1, 2017.

Keep reading this article at: http://www.govexec.com/contracting/2016/11/obamas-fair-pay-safe-workplaces-rule-federal-contractors-appears-endangered/133436

A Texas court has issued a nationwide preliminary injunction stopping implementation of the Department of Labor’s (DOL) rule to more than double the current salary threshold for certain exemptions from overtime pay.

The court ruled on November 22, just a few days before its December 1, 2016 implementation date.

The court ruling came in response to lawsuits filed by 21 states, the U.S. Chamber of Commerce, and other business groups.  The plaintiffs argued that the DOL exceeded its statutory authority in raising the salary threshold and by providing for the automatic adjustment of the threshold every three years.

The preliminary injunction issued by the court cites concerns that the rule improperly created a salary test that would consume Congressional intent that the exemption be based on the type of duties performed. Additionally, the court found merit in plaintiffs’ argument that states would be irreparably harmed by implementation of the rule before a final decision by the court because states facing budget restraints would have to expend a substantial sum of unrecoverable public funds to increase salaries or pay overtime to employees and may possibly have to layoff or reorganize workforces causing a substantial interference in government services.

A preliminary injunction is not permanent, but it does preserve the current rule while the court deliberates the merits of the case. As a result, the new rule will not take effect on December 1, 2016, and employers may continue to classify employees as exempt if they pay employees at least $23,660 annually on a salary basis and if the employees meet the appropriate duties test.

DOL’s rule could still become effective if the Texas court does not issue a permanent injunction or otherwise rule against the DOL.  The Labor Department is expected to challenge the ruling.

Because the preliminary injunction could be lifted on short notice, legal experts advise that employers should continue to prepare for changes called for in DOL’s rule.

Critical preparation considerations are discussed by the Piliero Mazza law firm at: http://www.pilieromazza.com/blog/far-reaching-impact-of-dols-increase-to-flsa-salary-thresholds 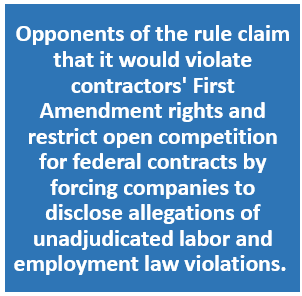