Whether you have won a contract or have received the dreaded unsuccessful offeror letter regarding the procurement you have been vying for, a debrief is a useful tool.  In its simplest of terms, the debrief is an explanation by the agency for choosing the proposal or quotation selected for award, the details of which depend on the specific Federal Acquisition Regulation (FAR) section under which the procurement was conducted.  But a debrief is so much more.  The debrief can provide the bases of protest, establish timeliness for a protest, and allow an unsuccessful offeror or bidder insight into how to improve their proposal or quotation for the next procurement.

The annual National Defense Authorization Act (NDAA) has long been used to impose government-wide procurement reforms.  The recently enacted NDAA, signed by President Trump on December 20, 2019, continues this practice, by requiring agencies to provide unsuccessful offerors on smaller dollar task or delivery orders above the Simplified Acquisition Threshold an explanation as to why their proposal was unsuccessful as well as the rationale for the award.

Currently, agencies are not required to provide debriefings to unsuccessful offerors on FAR Part 16 task or delivery orders smaller than $5.5 million, leaving many contractors with no explanation as to why their offers were not successful.  Section 874 of the FY 2020 NDAA requires that Federal Acquisition Regulation (FAR) 16.505(b)(6) be amended to provide that, upon request by an unsuccessful offeror, the Contracting Officer on a contract above the Simplified Acquisition Threshold and less than $5.5 million shall “provide a brief explanation as to why such offeror was unsuccessful that includes a summary of the rationale for the award and an evaluation of the significant weak or deficient factors in the offeror’s offer.” 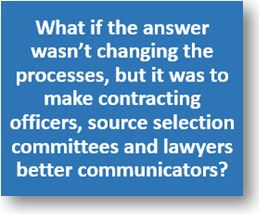 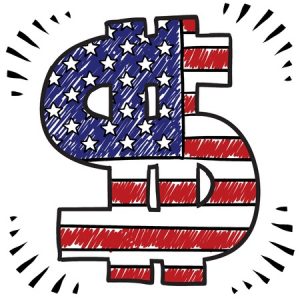 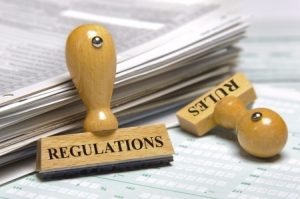 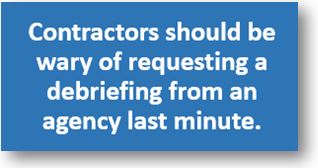 In Exceptional Software Strategies, Inc., B-416232, the Government Accountability Office (GAO) recently addressed the obscure rules for when a disappointed offeror must request a debriefing.

It’s generally well known that, in procurements where offerors may have a right to debriefings, a disappointed offeror must submit a written request to the contracting officer within three days after receipt of written agency notice that the company’s proposal has been excluded from the competitive range (FAR 15.505(a)(3)).

If an offeror misses the deadline, it does not necessarily mean it won’t get a debriefing, but any debriefing will not be “required.”

In Exceptional Software, on Thursday, March 15, the National Security Agency (NSA) provided the protester with written notice that its proposal was excluded from the competitive range and provided a brief rationale for that exclusion. Under FAR 15.505(a)(3), the offeror then had three days – until Monday, March 19 – to request a debriefing. (When the third day falls on a weekend or holiday, the deadline always moves to the next business day.) On Monday at 4:59 p.m., the offeror submitted its written request for a debriefing, which the NSA provided on April 2.  Four days later, the offeror protested.

Keep reading this article at: http://www.mondaq.com/article.asp?articleid=728628

As discussed in an earlier post about the NDAA for FY 2018, one of the most significant changes with respect to procurement issues may be related to the DoD’s conduct of debriefings.

Perhaps missed in the discussions of a potential new protest regime going into effect in a couple years is the fact that one of the most significant debriefing changes is effective immediately without the need for a new regulation.

Specifically, Section 818 of the NDAA required that DoD agencies provide disappointed offerors with an opportunity to ask follow-up questions “within two business days after receiving a post award debriefing” and provided that the “5-day period” associated with the timeline for a CICA stay “does not commence until the day the Government delivers to a disappointed offeror the written responses to any questions submitted” pursuant to the new rule. Because these provisions of the NDAA amended the underlying statutes (10 U.S.C. § 2305 and 31 U.S.C. § 3553) instead of requiring the Secretary to amend the DFARS, these rules went into effect upon the signing of the NDAA. In fact, in a few cases since the NDAA went into effect, we have seen DoD agencies agree that the new rules are in effect.

So, what do contractors need to know?

Keep reading this article at: http://www.mondaq.com/article.asp?articleid=674748

The Government Accountability Office’s recent decision in Protect the Force Inc.—Reconsideration demonstrates the importance of understanding GAO’s prior case law and carefully following the rules set out in its bid protest regulations.

On July 27, 2015, after the submission of final proposal revisions, the U.S. Army notified offerors it was amending the maximum dollar amount for a line item in the request for proposal (RFP). The Army declined, however, to provide offerors with an opportunity to submit revised proposals in response to this amendment. Two days later, the agency notified PTF that it was eliminated from the competition. PTF timely requested a debriefing, which the agency provided on August 5, 2015. Five days after the debriefing, PTF filed a bid protest at the GAO challenging the agency’s amendment to the RFP. To recap the timeline of PTF’s protest: PTF filed 14 days after the agency amended the RFP, 12 days after PTF was eliminated, and 5 days after it was provided with a required debriefing.

Keep reading this article at: http://www.mondaq.com/article.asp?articleid=440708