Inscribed over the doors of the U.S. Supreme Court are the words “Equal Justice Under Law.” It’s a reminder that judicial decisions should be just. That doesn’t necessarily mean fair.

In Aspic Engineering and Construction Company v. ECC Centcom Constructors, LLC, U.S. Court of Appeals for the 9th Circuit, Case No. 17-16510 (January 28, 2019), the 9th Circuit overturned an arbitration decision in favor of a local Afghani subcontractor seeking termination costs after it was terminated for convenience by a U.S.-based general contractor.  This, despite the arbitrator’s finding that the subcontract was “clearly drafted to give every advantage to” the general contractor, that the local Afghani subcontractor’s “experience with government contracting [was] not nearly as extensive as that of” the general contractor, and “that the normal business practices and customs of subcontractors in Afghanistan were more ‘primitive’ than those of U.S. subcontractors experienced with U.S. Government work.”

Local Afghani subcontractor Aspic Engineering and Construction Company was awarded two subcontracts by ECC Centcom Constructors, the general contractor, on two projects in Afghanistan overseen by the United States Army Corps of Engineers. The first subcontract involved construction of various buildings in the Badghis province of Afghanistan.  The second subcontract involved the construction various buildings Sheberghan province of Afghanistan.  Both subcontracts included clauses from the Federal Acquisition Regulation (FAR), which were incorporated by reference, and included flow-down provisions obligating Aspic to ECC in the same manner that ECC was obligated to the U.S. government.

Keep reading this article at: https://www.jdsupra.com/legalnews/federal-subcontractor-who-failed-to-43185/ 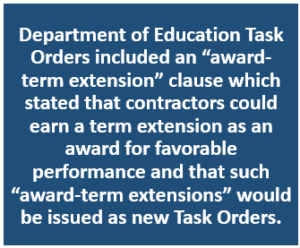 On Feb. 22, 2016, the U.S. Supreme Court will be hearing oral arguments in a controversy that deals with whether federal agencies are doing enough to assure that their contracts go to businesses run by veterans, especially service-disabled veterans.

You’ll be able to access live reports, a Twitter feed, and even a free webinar on the Court’s hearing.  More about that in a moment, but first some background and information on why this case is so significant.

The case dates back to November 27, 2012, when the U.S. Court of Federal Claims ruled that the Department of Veterans Affairs (VA) has discretion to procure goods and services from GSA’s Federal Supply Schedule (FSS or simply GSA Schedule) without first considering a set-aside acquisition for service-disabled veteran-owned small businesses (SDVOSBs) or veteran-owned small businesses (VOSBs).

The Court of Federal Claims ruling represented a departure from several U.S. Government Accountability Office (GAO) decisions that stated the VA should comply with the Veterans Benefits, Health Care, and Information Technology Act of 2006 before conducting a GSA Schedule buy.  The 2006 Act created the so-called “Veterans First” contracting program that gives priority to SDVOSBs and VOSBs in the VA’s acquisitions.  Despite GAO’s opinions, the VA instructed its contracting officers to not apply the “Veterans First” principles to GSA Schedule contracting.

A Winding Road to the Supreme Court

The company bringing the challenge, Kingdomware Technologies, Inc., appealed the decision by the Court of Federal Claims.  But the U.S. Court of Appeals for the Federal Circuit held that the purpose of the “Veterans First” rule is to ensure that the VA meets its SDVOSB goals, and that so long as the VA meets its SDVOSB goals, it is free to procure services and supplies from the Federal Supply Schedule without first considering a SDVOSB procurement.  This lead the Kingdomware firm to take its plea to the Supreme Court.

Then the VA surprised everybody.  It abandoned the argument that the statutory preference for veteran-owned companies applies only if the VA has not met its SDVOSB or VOSB contracting goals.  That position had proven to be successful in its arguments before both the Court of Federal Claims and the Federal Circuit.  The government’s new argument was that the statute’s use of the term “contract” excludes orders under the Federal Supply Schedule or other multiple award vehicles.  This new strategy by government lawyers puzzled Court watchers and federal contracting experts alike.

The mystery of how this case would turn out got more murky.  On Nov. 4, 2015 — just five days before the Supreme Court was scheduled to hear oral arguments in the Kingdomware case — the Court yanked the case from its docket.  The Court directed the parties, not later than Nov. 30, to submit briefs on whether the contracts in question had been fully performed, and if so, whether full performance renders the case moot.

In response to the briefs, the Supreme Court announced, just before Christmas, that the Court would hear oral arguments in Kingdomware Technologies v. United States on February 22, 2016.

Anxious To Learn about the Arguments Made to Supreme Court?

Everyone who’s interested is small business set-asides, in general, and to extent to which the VA must prioritize veteran-owned firms in its contracting, specifically, wants to know about the arguments being made to the Supreme Court in this case. 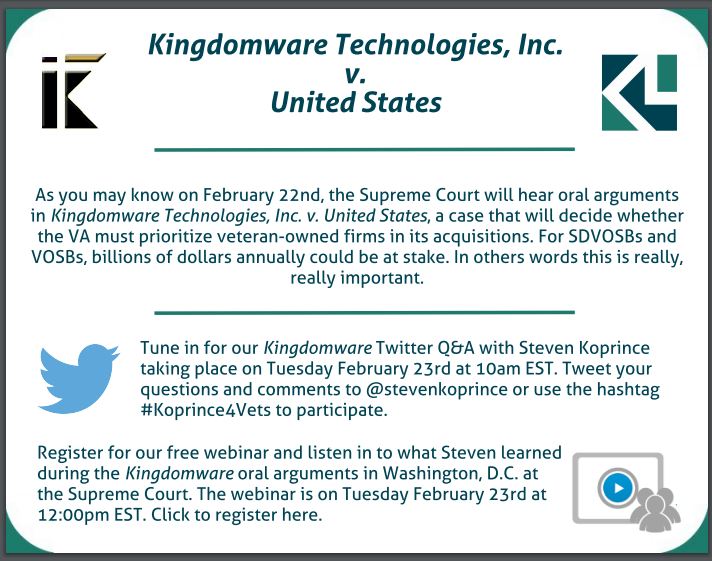