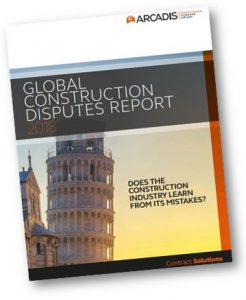 Construction contract disputes across the world are getting longer, more complex and more expensive, according to the “Global Construction Disputes Report 2018” from design and consultancy firm Arcadis.

The value of North American disputes — or total costs added to a project for the additional work being claimed — dropped for a fourth consecutive year to $19 million in 2017, compared with the $43 million global average, the report found. Meanwhile, the average length of North American disputes increased from 15.6 months in 2016 to 17.7 months last year, exceeding the global average of 14.8 months.

Contract errors and/or omissions were the top cause of disputes in North America last year, followed by poor contract administration, which was trailed by failure on the part of an owner, contractor or subcontractor to understand or comply with contractual obligations.

Social infrastructure and the public sector collectively saw the most disputes while the transportation sector saw the second most.

Keep reading this article at: https://www.constructiondive.com/news/report-contract-disputes-are-getting-longer-more-complex/527970/ 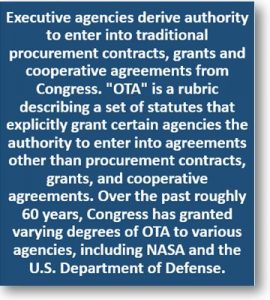 Ready or not — federal agencies are increasingly utilizing “other transactions authority” (OTA) to craft agreements that are not subject to traditional procurement laws and therefore should, in theory, allow the government greater access to innovative solutions.

While the goal of OTA procedures may be to avoid bottlenecks inherent in procurement under the Federal Acquisition Regulation, in the end they may result in valuable contracts with the government. As with any such contracts, it is inevitable that disputes will arise during their formation and administration.

While there is very little precedent relating to protests of OTA awards or claims arising under OTA-awarded contracts, there are some fundamental principles and analogous decisions that suggest how this early history of OTA protests and claims may unfold.

This article attempts to portray the current landscape for protests of OTA awards and contract claims arising during performance of an OTA agreement.

Keep reading this article at: http://www.mondaq.com/article.asp?articleid=721778 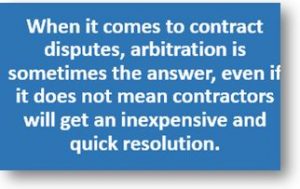 Many construction firms have never had a legal dispute that couldn’t be resolved quickly and amicably without a lawyer. But for those who aren’t so lucky, it can sometimes be surprising to take a good look at a construction agreement to see what legal remedies are available and find that a traditional jury trial is not even an option.

In those cases, the last legal stop could be arbitration.

Contractors sometimes conflate arbitration with mediation, which is another form of alternative dispute resolution in which contractors try to work out their differences with the assistance of a neutral third party well versed in construction law who is only there to be a sounding board.

Keep reading this article at: https://www.constructiondive.com/news/the-dotted-line-what-contractors-need-to-know-about-arbitration/523167/

The late, great Yogi Berra once said that “Baseball is 90 percent mental. The other half is physical.”  Sometimes it seems as if Yogi’s logic is equally applicable to the claims process in the world of Government contracting, where 90 percent of the early battle is following the correct claim initiation procedures prescribed by the Contract Disputes Act (CDA), 41 U.S.C. §§ 7101-7109.

The CDA is an indispensable statute that, inter alia, codifies a disputes process for companies wishing to assert claims based on Government acts and/or omissions in connection with a contract to which the CDA applies. Although the CDA is omnipresent in the world of Government contracting, an August 4, 2016, decision by the Armed Services Board of Contract Appeals (Board) highlights the danger faced by contractors who fail to comply with its most basic requirement – i.e., the written submission of a valid “claim” to the Contracting Officer in the first instance. The case is Arab Shah Constr. Co., ASBCA No. 60553, and the facts are straightforward:

Keep reading this article at: http://www.mccarter.com/Government-Contractors-Can-Learn-From-Yogi-Berra-Failure-to-Follow-Correct-Claim-Submission-Procedures-Results-in-Jurisdictional-Doom-08-30-2016/

A request for equitable adjustment (REA) is not a “claim” under the Federal Acquisition Regulation (FAR).  Although a REA and a claim can look very similar, there are important legal distinctions.

And as one contractor recently learned, the distinction between a REA and a claim can make all the difference when it comes to a potential appeal.

First things first: what exactly is the difference between a REA and a claim?

Keep reading this article at: http://smallgovcon.com/claims-and-appeals/reminder-a-rea-is-not-a-claim/ 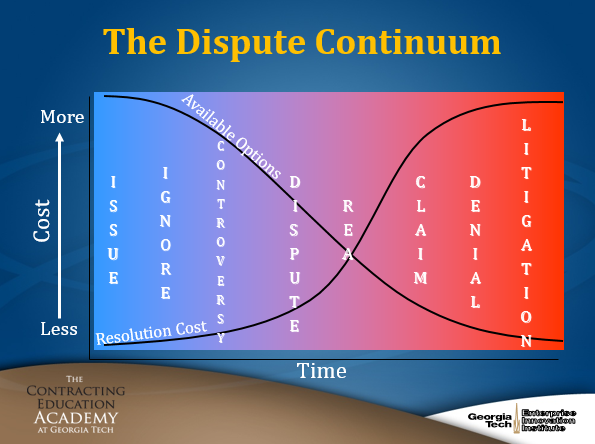 A Contracting Officer’s death did not waive the requirement that a contractor file a claim with the agency before bringing its claim to federal court.

In a recent decision, the Court of Federal Claims held that a contractor was not entitled to forego the claim requirement because of the Contracting Officer’s death–even though the agency did not appoint a replacement.

Keep reading this article at: http://smallgovcon.com/claims-and-appeals/contracting-officers-death-didnt-waive-claim-requirement/