The U.S. defense industry is on track for one of its best years in recent memory.

The five largest U.S. defense contractors — Lockheed Martin, Boeing, Northrop Grumman, Raytheon and General Dynamics — reported healthy financial results for the third quarter, in a series of earnings reports over the past week.

They benefited from a defense budget that has grown significantly under a Republican-controlled Congress and White House, as well as a 2017 tax overhaul that slashed their corporate tax rates.

They have also taken advantage of a more stable budget environment that has made it easier for them to prepare for the future. Last year, Congress lifted the “sequestration” budget caps that have limited defense spending since 2013. For the first time in years, lawmakers passed their most recent spending bill without a “continuing resolution,” giving defense firms a better blueprint for their future sales.

Keep reading this article at: https://www.washingtonpost.com/business/2018/10/26/us-defense-contractors-report-that-business-is-booming-thanks-new-spending-lower-taxes

Congress’ short-term spending bill signed on Jan. 22, 2018 ended the nearly three-day government shutdown. As this spending bill only appropriated funding for government operations for three weeks, however, and does not resolve the underlying political disputes, it is unlikely to put an end to shutdown politics for good, or even for long.

Participants in the federal market would be wise to review the issues and challenges presented by shutdowns in order to remain prepared for what may come.

What Activities Can Continue During a Shutdown?

During a shutdown, federal contractors must determine whether they may continue performing. A government shutdown is not a self-executing stop-work order; a shutdown itself does not suspend a company’s obligations to perform or the government’s obligation to pay for performance. What matters is whether a contractor’s work requires any new appropriation or authorization of spending, and whether critical government personnel, facilities, and resources are available.

Keep reading this article at: http://www.mondaq.com/article.asp?articleid=666774

Government employees aren’t the only ones who are wondering what they’ll be doing on Monday if Congress can’t reach a budget agreement; federal contractors are also facing a lot of uncertainty.

Depending on when their contract was funded, what agency they’re with, what they’re doing, and where they work out of, some contractors may continue working as if nothing has changed.

There are a lot of variables at play and most of them look to be less than ideal for contractors, who in most cases will lose money during this ordeal. But while everyone hopes this will remain a short-term dispute, there are a couple of ways contractors can use the time away from federal job sites more productively.

Keep reading this article at: https://wtop.com/government/2018/01/federal-contractors-government-shutdown/ 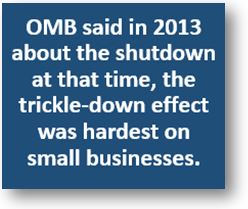 Government contractors are often overlooked when it comes to the threat of a government shutdown. And as the most current threat becomes more and more real, many are waiting for guidance from their agency customers.

“We are hearing there is a lack of communication,” said David Berteau, the CEO of the Professional Services Council, an industry association. “We saw cases in 2013 where the contracting officer and contracting officer representative for a program gave direction to the contractor and put them on the list of cleared individuals, but when they showed up at the base or installation, there was no guard or the guard didn’t let them in. There were a lot of those disconnects in 2013. If a shutdown happens this time, the same thing may happen.”

PSC, the IT Alliance for Public Sector and the Coalition for Government Procurement are offering resources centers for contractors as they plan for a possible partial shutdown.

Keep reading this article at: https://federalnewsradio.com/government-shutdown/2018/01/impact-of-a-shutdown-on-contractors-means-lost-wages-project-delays/ 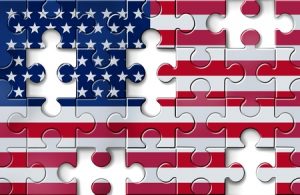 With yet another government shutdown looming, contractors face a number of uncertainties and challenges that warrant close attention — regardless of whether a shutdown takes place or how long it lasts.

Among other challenges, contractors may face:

Below we offer six suggestions to help address key areas impacted by a shutdown, including contract funding, internal and external communications, recordkeeping, and deadlines.

Keep reading this article at: https://governmentcontractsnavigator.com/2018/01/19/government-contractor-shutdown-advisory/ 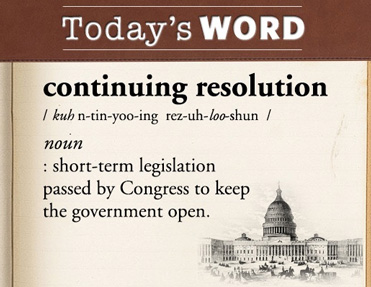 As Yogi Berra famously quipped, “It’s like Déjà vu all over again!”

In that spirit, Congress has again signaled that it will pass a continuing resolution to fund the Government through spring—despite vocal opposition from the Pentagon.

As a result of this short term funding mechanism, contractors face a number of potential pitfalls:  contract options are at risk, the next round of incremental funding is unlikely to arrive, and new contract awards and program approvals will be scarce.

These pitfalls, however, can be mitigated—and even exploited—by diligent contractors.

Continuing resolutions (CRs) are appropriation acts that provide budget authority for federal agencies to continue operations when Congress and the President have not passed regular appropriations acts by the beginning of the fiscal year.  Typically, CRs allocate funding for a short duration in proportionate amounts from the time period of the preceding year, with the additional limitation that the rate of expenditure cannot exceed the previous year’s rate.  This means agencies are not only limited to the total funds from the prior year, but so too by the rate of spending from the prior year.  These limitations pose some obvious problems for contractors: options are at risk and incrementally funded contracts may face funding gaps.

Keep reading this article at: https://www.insidegovernmentcontracts.com/2016/12/deja-vu-continuing-resolution-raises-potential-pitfalls-contractors/

Lawmakers are working behind the scenes to cobble together a continuing resolution in the next two weeks to keep the government open past Oct. 1.

Senate Majority Leader Mitch McConnell, R-Ky., has scheduled for Monday evening (Sept. 19, 2016) a vote to proceed on a short-term continuing resolution that funds the government through Dec. 9, according to a tweet from CQ Roll reporter Jennifer Shutt. The hope is that the Senate will finish up work on the stopgap spending measure by the middle of next week, and send it over to the House for a vote later next week. H.R. 5325, the legislative branch spending bill, is serving as the legislative vehicle for the short-term CR.

Senators tried to get the measure squared away this week, but partisan battles over various issues cropped up. Earlier this week, Senate Democratic leader Harry Reid of Nevada told reporters that “lots of problems” remained with a Republican stopgap spending proposal, according to The Hill.  Republicans do not want any of the money allotted to fight the Zika virus in Puerto Rico to go toward Planned Parenthood clinics, and there are other fights over disaster aid to Louisiana and Internet oversight. It’s also possible that the House will move forward on its own next week without waiting for the Senate to send something over.

Keep reading this article at: http://www.govexec.com/management/2016/09/congress-tries-avoid-government-shutdown-oct-1-nears/131577

[Note: This article was written by Terry Verigan, vice president of CompuCure.]

Hurricane Katrina nearly killed CompuCure. In the wake of the storm, just three of us remained by Oct. 1, 2005, and the weeks ahead promised to be grim for our New Orleans-based IT services firm — what was left of it anyway. But we weren’t going to let that damn storm chase us away from our city.

By September 2013, eight long years after Katrina wiped out so many lives and businesses, CompuCure had rebounded sufficiently to make Inc. Magazine’s list of the fastest growing businesses in America. With a talented staff of 30 delivering projects that had achieved national recognition for quality and value, it was tempting to think we’d made it to some sort of safe high ground, economically speaking. But by late September, our president and owner, Angelina Parker, faced another storm, this one political. The federal shutdown nearly took down the business again.

While we had become accustomed to the disruptions that stemmed from continuing resolutions — the stop-gap budgets lawmakers typically adopted while they continued to disagree over larger spending questions — those rarely impacted our work at federal sites. Employees would clock in while budgets were frozen and eventually CompuCure would be reimbursed. Our line of credit was more than sufficient to carry on. Interest charges eat away at profitability, but we could keep going, knowing that our people and their families felt secure. Our most valuable resources, our employees, would still be on the job.

But the shutdown was different. It meant lost revenue to CompuCure, not just a delay in getting invoices paid. Disturbing questions emerged, notably: How would we keep our talented employees from moving to other companies less dependent on federal contracts?

Keep reading this article at: http://www.nextgov.com/cio-briefing/2013/12/reflections-2013-year-nearly-killed-one-small-federal-it-firm/76097/?oref=nextgov_cio_briefing

The U.S. Defense Department will slow payments to prime contractors in the coming week in an attempt to increase its on-hand cash as defense spending cuts loom.

Pentagon officials said changing these payment processes combined with other initiatives will add about $1 billion, or a few days worth, of available cash within working capital spending accounts. DoD will begin notifying contractors of these payment changes in the coming days.

The Pentagon is facing a $46 billion reduction to its 2013 budget between March and September should across-the-board defense spending cuts, known as sequestration, go into effect.

Also complicating matters is that DoD is operating under a continuing resolution, which freezes spending at 2012 budget levels, creating an $11 billion shortfall from planned 2013 spending. The continuing resolution also keeps funds aligned in the same accounts as 2012, meaning new programs cannot start and ones that have been terminated are still receiving money.

Keep reading this article at: http://www.defensenews.com/article/20130221/DEFREG02/302210019/Pentagon-Slow-Contractor-Payments-Boost-Cash-Reserve?odyssey=tab%7Ctopnews%7Ctext%7CFRONTPAGE.