What he thinks is different from the former Cold War starts with China’s economic scale.  China clearly has the potential to overtake the U.S. in terms of economic scale because its population is four times as large, Brown said.

The other key difference is China is well integrated into the global economic system, he said.

“That’s part of the reason they’ve risen so dramatically economically, and they’re using global institutions.  They want to be well-integrated and, in fact, setting [up] how those institutions operate.  China [also] wants to have very successful integration of commercial technology into their military,” he said.

China has quite an impressive set of technologies where they’re already leading, Brown said. 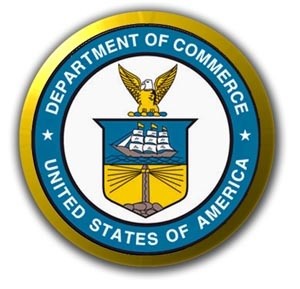 Commerce ICTS Regulations to Go Into Effect; Chinese ICTS Companies, Products, and Services in the Headlights

The Trump Administration rolled out regulations to implement prohibitions on the use or delivery of covered Chinese telecommunications and video surveillance products and services.  Additionally, its Department of Commerce had engaged in rulemaking to implement processes and procedures for identifying supply chain risks posed by Chinese Information and Communications Technology Sector (ICTS) companies, products, and services.  The Biden Administration has come to town and many have wondered what is going to happen to this rulemaking when it becomes effective in March 2021.  Law360 quotes the new Secretary of Commerce as saying “The Biden-Harris administration has been clear that the unrestricted use of untrusted ICTS poses a national security risk…Beijing has engaged in conduct that blunts our technological edge and threatens our alliances.”  For those wondering whether the Biden Administration will continue its tough stance on Chinese ICTS, China and ICTS remain a target of potential enforcement activities under the Biden Administration: “The administration is firmly committed to taking a whole-of-government approach to ensure that untrusted companies cannot misappropriate and misuse data and ensuring that U.S. technology does not support China’s or other actors’ malign activities.”  The Administration has backed up these words with actions, applying the Commerce rules to issue subpoenas to Chinese ICTS firms to further assess the risks they pose to the supply chain.  However, the Administration is also holding talks with China this week and one wonders whether and to what extent this action is intended to impact that discussion.

Government contractors are facing a significant compliance burden thanks to three new FAR provisions that impose restrictions on contractors who supply or use Chinese telecommunications equipment services.

Have you a received Section 889 letter yet?  If not, you may soon.  The letters ask whether you provide or use “covered telecommunications equipment or services.”  They are part of the implementation of Section 889 of the John S. McCain National Defense Authorization Act for Fiscal Year 2019 (the 2019 NDAA), which has two phases.  The first phase started in August 2019 but has a limited scope.  The second phase—which started in August 2020—is much broader and raises a lot more questions.  This article answers some of those questions and provides some tips on how to comply.

At the end of 2019, the Department of Defense (“DoD”) took another step to limit the potential cyber risks posed by telecommunications equipment manufactured by Chinese companies (and potentially Russian ones too).  We previously have blogged on this topic here, here, here, here, here, and here, noting developments both in terms of general, government-wide regulations through the FAR Council, and those specifically emanating from DoD.  On December 31, 2019, DoD issued a Defense Federal Acquisition Regulation Supplement (DFARS) interim rule to further implement parts of the 2018 and 2019 National Defense Authorization Acts (“NDAA”).

On August 7, 2019, the U.S. Department of Defense (DoD), General Services Administration (GSA), and National Aeronautics and Space Administration (NASA) released an interim rule implementing Section 889(a)(1)(A) of the John S. McCain National Defense Authorization Act for Fiscal Year 2019 (2019 NDAA).  The rule, which goes into effect on August 13, 2019, generally prohibits executive agencies from procuring telecommunications equipment and services from Huawei and other Chinese technology companies and imposes strict reporting and other requirements on U.S. government contractors.  Interested parties are invited to file comments on the interim rule within 60 days of its publication in the Federal Register.

As background, Section 889(a)(1)(A) of the 2019 NDAA prohibits executive agencies from procuring or obtaining, or extending or renewing a contract to procure or obtain, any equipment, system, or service that uses “covered telecommunications equipment or services” as a substantial or essential component of any system, or as critical technology as part of any system.  The 2019 NDAA defines “covered telecommunications equipment or services” to include the following:

A ban on Chinese tech is on the books. Are feds ready? (Federal Times)

The US Department of Energy (DOE) issued Order No. 486.1 on June 7 prohibiting DOE employees and contractors from participating in the foreign government “talent recruitment programs” of countries designated by the DOE as a “foreign country of risk,” which apparently include China and Russia.  The order aims to balance the DOE’s broad scientific mission with national security interests by preventing the unauthorized transfer of scientific and technical information to certain foreign entities.  DOE contractors and subcontractors within the utility and nuclear sectors should be prepared to implement controls to ensure that neither they nor their employees or subcontractors participate in these foreign-sponsored programs for identified countries.

The order represents another step in federal efforts to reduce the ability of certain foreign countries to obtain sensitive technical knowledge from critical US industries.  The DOE was driven by concerns that foreign governments use talent recruitment programs to target scientists, engineers, and other technical experts to “reduce costs associated with basic research while focusing investment on military development or dominance in emerging technology sectors.”

The U.S. China Innovation Alliance (UCIA), in partnership with Georgia Tech’s Enterprise Innovation Institute, is organizing a May 16, 2018 event in Atlanta to promote innovation through the exchange of ideas and collaboration between U.S. innovative technology startups and Chinese investors, strategic partners and professional services firms.

The event is called the 2018 InnoSTARS Competition.  More information and applications for participation can be made at: http://uschinainnovation.org/innostars2018/atlanta-city.

The InnoSTARS Competition is a platform for innovative U.S. companies to compete for an opportunity to travel to China to pitch their business and make international connections while getting real feedback in highly sought-after Chinese innovation hubs. Business have the opportunity to meet industry-specific investors and partners with fund sizes larger than $50 million.

Inquiries can be directed to: http://uschinainnovation.org/innostars2018/contact-us/ 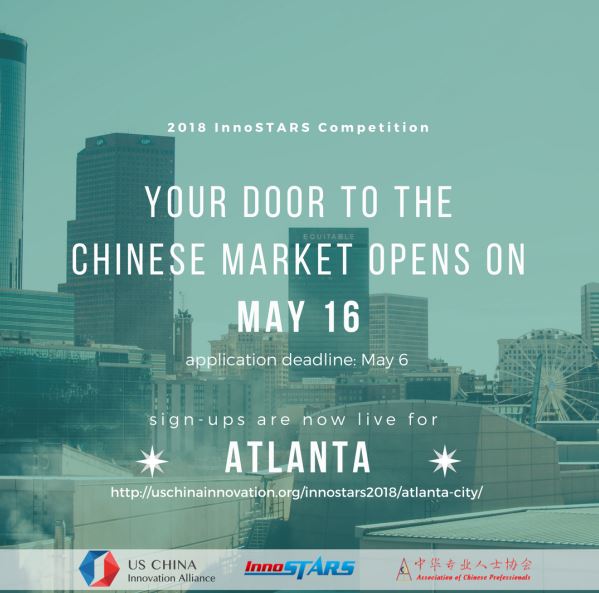