This is the second in a series of blogs regarding the General Services Administration’s (“GSA”) Multiple Award Schedule consolidation.  Previously, we addressed GSA’s three phases of consolidation.  In this post, we focus on certain fundamental, structural changes to the consolidated schedule made during Phase I.

In a March 21 memo to all agency heads, Office of Management and Budget Deputy Director Margaret Weichert—who is doing double duty running the Office of Personnel Management — tasked agencies with a new reporting regime for shared services that “supersedes and rescinds” OMB directives from 2011 and 2012.

Category management involves agency teams coordinating bulk purchasing in areas such as information technology, security and protection, and transportation. Weichert’s memo reported that as much as 56 percent of the government’s $325 billion in purchases of software, mobile services, technology services and travel remained “unaligned” or decentralized, as of December 2018.

“This statistic confirms that substantial cost-avoidances and performance benefits are going unrealized and underscores the need for greater management attention on collaborative buying at both the federal and agency levels by increasing the portion of an agency’s spend” using category management, the memo said.

Keep reading this article at: https://www.nextgov.com/cio-briefing/2019/03/white-house-issues-new-guidance-category-management/155759/

It’s been a year since the Office of Federal Procurement Policy released and accepted comments on its draft circular around category management.

With little-to-no activity on the draft circular over the past year, it seems OFPP is taking a less permanent route to further institutionalize this approach to buying.

Federal News Radio has learned OFPP sent a draft memo out for comment across the agencies earlier this summer, focusing on demand management and “best-in-class contracts.”

keep reading this article at: https://federalnewsradio.com/reporters-notebook-jason-miller/2017/11/ofpp-drafts-memo-to-replace-category-management-circular/ 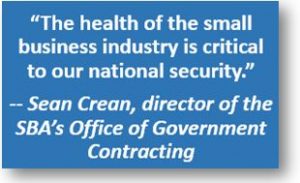 The federal government’s push to increase the number of category management procurement contracts, though good for saving money, can hurt small businesses, according to experts who spoke at the Small Business Administration’s ChallengeHER event promoting women-owned small businesses last Thursday.

“Category management is an effort by the federal government to be able to save money,” said Sean Crean, director of the SBA’s Office of Government Contracting. He explained that the government wants agencies to save money by using the contracts already developed by other agencies.

“The government is now saying, ‘Hey, we want other agencies to look at these contracts that have already been established. Why reinvent the wheel? Why go through the expense of establishing your own contract, if you can probably satisfy some of the requirements you have by going to the other, well established contracts that are out there?’” he said. “The concern that we have at SBA with category management is that it shrinks the playing field of competitors that are out there.”

Keep reading this article at: https://www.federaltimes.com/acquisition/2017/10/20/category-management-contracts-hurt-small-businesses/ 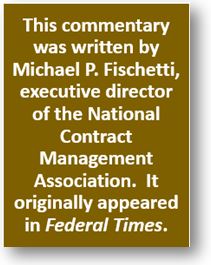 As the final push for fiscal 2017 contract obligations comes to an end, it’s helpful to take a step back and assess the contracting environmental trends that have emerged over the past year. Each trend lends itself to further study, so here’s a high-level look at the top 10.

1. Federal sector spending has bottomed out, with anticipated growth.

Following years of declining spending, it is beginning to appear like this decline has bottomed out, with a growth in federal spending on the horizon. While there is considerable talk, firm steps are in motion for increased contract spending, particularly in defense, with reduced civilian agency spending. Clearly, a reevaluation is occurring from the dramatic budget cuts proposed for many civilian agencies, while the Department of Defense will reap increases in the short term.

Keep reading this article at: http://www.federaltimes.com/acquisition/2017/08/25/top-10-acquisition-trends-of-fy17-commentary/ 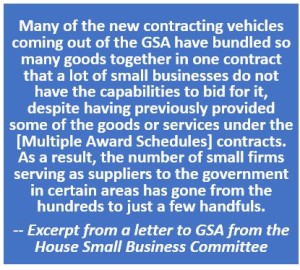 While the White House and the General Services Administration (GSA) have made category management a pillar of their attempts to streamline federal acquisition, two members of the House Small Business Committee worry the more means small businesses will be squeezed out of competition for federal contracts.

The White House and the federal CIO’s office have issued a series of polices in recent months calling for the elimination of what they term redundant or duplicative contracts, and moving agencies onto governmentwide contracts.

But according to a letter from Rep. Nydia Velazquez (D-NY) and Rep. Steve Chabot (R-OH), the move within GSA spells doom for small businesses.

Keep reading this article at: http://publicspendforum.net/category-management-small-contractors/

Erville Koehler, regional commissioner for the Federal Acquisition Service at GSA, wrote in a blog post published last Wednesday that GSA AdvantageSelect is a category management-based tool designed to help contracting officials place orders for IT products without the need to undergo competition.

Keep reading this article at: http://www.executivegov.com/2015/08/erville-koehler-gsa-to-test-pre-competed-it-products-through-advantageselect-portal/

If you missed BGOV’s April 22, 2015 conversation with Office of Federal Procurement Policy (OFPP) Administrator Anne Rung, you’ll have to wait to hear the punchline from her story about her first television appearance.

For now you’ll have to make do with five key takeaways from the event at BGOV’s Washington office:

Keep reading this article at: http://about.bgov.com/nextedge/5-things-contractors-need-to-know-about-category-management/

The General Services Administration (GSA) issued a proposed rule on March 4, 2015 that responds to the contracting concept of “category management” introduced December 4, 2014 by the Office of Federal Procurement Policy (OFPP).  The OFPP concept shifts federal purchasing’s focus from managing purchases and prices individually on thousands of procurement actions by dozens of federal agencies to managing categories of purchases across the government.  To implement this concept, GSA’s proposed rule would require vendors on Federal Supply Schedule (FSS), Governmentwide Acquisition Contracts (GWACs) and Governmentwide Indefinite-Delivery, Indefinite-Quality (IDIQ) contracts to report all government transactions, including prices paid.  GSA contends the new rule is needed because the government currently lacks a mechanism that facilitates examination of prices paid by agencies on individual contracts, and this has caused pricing disparities in contracts for similar products and services.

If the proposed rule is adopted, the General Services Administration Acquisition Regulation (GSAR) would be amended to require that vendors report transaction data on individual FSS, GWAC and IDIQ contracts.  Details to be reported include unit of measure, quantity of items sold, universal product codes, prices paid per unit, and total price.  Such contracts accounted for about $39 billion in federal procurements in fiscal year 2014, according to the agency.  GSA says their existing price reduction-related monitoring requirements will be pared back to compensate for the additional reporting burden on contractors.  FSS contracts administered by the Department of Veterans Affairs would be exempt from the new rules.

In introducing the proposed rule, GSA says: “The current lack of transparency on prices paid by government customers has led to significant price variation, sometimes 300 percent or more, for identical purchases by federal agencies from the same commercial vendor as well as the unnecessary duplication of contract vehicles.”

If the proposed rule is finalized, it will go into effect immediately as a pilot program for GWAC and IDIQ contracts.  For FSS contracts, the new rule would be implemented in phases, initially involving only certain products and services in order to test the usefulness of the collected data in eliminating contract duplications and price variations.

The proposed rule could be seen to be at odds with recommendations that were first formulated by GSA’s own Multiple Award Schedules Advisory Panel.  In 2009, the MAS Advisory Panel made 20 recommendations on how GSA could improve the Schedules program.  Prominent among the recommendations were the outright removal of the price reduction clause (PRC) from contracts for products and services and establishment of a process for ordering activities to collect and report on their purchasing, including quantity, quality, and price.  Currently, the PRC clause is included in every Schedule contract in an effort to obtain contractors’ best prices.   If contractors do not abide by this contract requirement, they risk having a whistleblower, an inspector general, or the Justice Department filing a complaint or bringing charges pursuant to the False Claims Act.  In addition, GSA presently may request a price reduction at any time during the contract period when their market analysis indicates that lower prices are being offered or paid for the same items under similar conditions.  According to data collected by the Chief Acquisition Officer’s Council, contractors regard the PRC as one of the most complicated and burdensome requirements in federal contracting, and GSA’s own estimates suggest FSS contractors spend over 860,000 hours a year (at a cost of approximately $58.5 million) on compliance with this clause.

Already, there are concerns being voiced that if GSA’s primary motive behind the proposed rule is simply to obtain lower prices, the government runs the risk of losing quality contractors who will not agree to disclose pricing data due to its sensitivity, let alone bear the new cost and administrative burdens associated with disclosure.  While there are differences of opinion among government and business leaders, GSA states that it believes that use of the proposed transactional data reporting clause could be a good alternative to the PRC, contending that the new rule will reduce administrative burden on contractors and have the effect of lowering prices to the government.

In order to sort out the issues and seek public comment, GSA is holding a public meeting and requesting comment on its proposal to amend the GSAR to include clauses that would require vendors to report transactional data from orders and prices paid by ordering activities. Interested parties may offer oral and/or written comments at GSA’s public meeting to be held on Friday, April 17, 2015, beginning at 9:00 a.m. EST.

In addition, as a part of the traditional public comment process that accompanies most proposed federal regulations, GSA is asking interested parties to submit written comments on or before Monday, May 4, 2015 to be considered in the formulation of a final rule.  Comments should be sent to: U.S. General Services Administration, Regulatory Secretariat Division (MVCB), 1800 F Street NW., 2nd Floor, ATTN: Hada Flowers, Washington, DC 20405-0001, citing GSAR Case 2013-G504 in all correspondence. All comments received will be posted without change to http://www.regulations.gov, including any personal and/or business confidential information provided.

For the April 17th public meeting, attendees can attend the meeting in person at GSA’s Central Office or virtually through GSA’s Internet meeting platform, Adobe Connect.