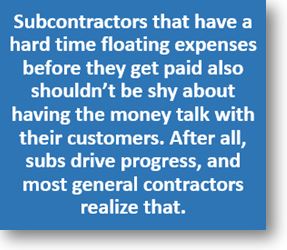 Very few construction projects happen without subcontractors. Some general contractors self-perform all or a portion of the construction work, but, most often, major and minor trades contribute the lion’s share of labor and materials.

And that makes perfect sense. Why not hand over installation of a concrete foundation to specialists who do it every day? The same goes for electrical, plumbing, metal framing, tile and roofing, just to name a few.

But general contractors don’t just delegate the responsibility of getting the work done when they engage subcontractors. They also pass on the burden of scheduling, securing the lines of credit necessary to supply materials and equipment, staffing the project and paying wages until they receive their first progress payment. For the biggest subcontractors, this could mean fronting millions of dollars in payroll and other expenses each month.

Keep reading this article at: https://www.constructiondive.com/news/schedules-and-payments-dominate-subcontractor-challenges/514756/

As feared, the 16-day government shutdown forced contractors to scramble for cash, revise their schedules, and reconnect with their agency liaisons, according to trade association officials.

“The good news is that most companies are putting folks back to work, which they should have been doing all along had there not been a shutdown,” said Alan Chvotkin, executive vice president and counsel at the Professional Services Council. “Our member survey shows that a large percentage of member companies did receive one or more stop-work orders. And though most, but not all, of those have now been reversed, large numbers of those contracts were unnecessarily and inappropriately stopped.”

Chvotkin said many agencies sent out blanket notices to all their contractors, even though a reading of the law says the notices would not apply to contracts fully funded in fiscal 2013 and contracts that don’t require access to government facilities or significant agency supervision. “So companies are now trying to redo those actions and restart work, which takes significant administrative work and deadlines such as something that was due in 30 days have to be rescheduled.”

Keep reading this article at: http://www.govexec.com/management/2013/10/contractors-say-shutdown-forced-them-reprioritize/72587/?oref=govexec_today_nl