The demand for archival data storage has been skyrocketing, and if a new research initiative reaches its goals, that need could be met by taking advantage of an efficient and robust information storage medium that has proven itself through the centuries: the biopolymer DNA.

The Intelligence Advanced Research Projects Activity’s (IARPA) Molecular Information Storage (MIST) program has awarded a multi-phase contract worth up to $25 million to develop scalable DNA-based molecular storage techniques.  The goal of the project, which will be led by the Georgia Tech Research Institute (GTRI), is to use DNA as the basis for deployable storage technologies that can eventually scale into the exabyte regime and beyond with reduced physical footprint, power and cost requirements relative to conventional storage technologies.

The technology already exists for storing and reading information into DNA — which also encodes the genetic blueprint for living organisms — but significant advances will be needed to make it commercially practical and cost competitive with established magnetic tape and optical disk memory.  While current archival storage has a limited lifetime, information stored in DNA could last for hundreds of years. 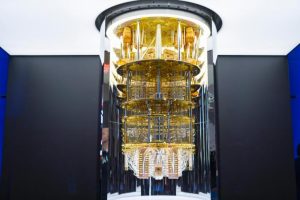 The Georgia Institute of Technology has announced its agreement to join the IBM Q Hub at the Oak Ridge National Laboratory (ORNL) to help advance the fundamental research and use of quantum computing in building software infrastructure and developing specialized error mitigation techniques.  Georgia Tech will have cloud access, via the Oak Ridge Hub, to the world’s largest fleet of universal quantum computing systems for commercial use case exploration and fundamental research.

“Access to IBM machines will allow Georgia Tech to build software infrastructure to make it easier to operate quantum machines, create specialized error mitigation techniques in software – thereby mitigating some of the hardware errors – and develop algorithms and applications for the emerging noisy intermediate-scale quantum (NISQ) computing paradigm,” said Moinuddin Qureshi, a professor in Georgia Tech’s School of Electrical and Computer Engineering.  “Access will also allow Georgia Tech researchers to better understand the error patterns in existing quantum computers, which can help with developing the architecture for future machines.”

“My mother applied for the visa lottery system in Nigeria,” Adeyemo said.  “She’d done it on a whim and ended up winning.”

Known to friends and family as Feranmi, she says she was only 5 years old when her family packed up and moved to Illinois.

As a student in Chicago, she excelled in math and science.

“I particularly loved chemistry,” she said.

When it came time to apply to colleges, a teacher suggested that Adeyemo check out chemical engineering programs.

She applied to two top programs after an online search: MIT and Georgia Tech.  She ended up being accepted to Tech and has not looked back. 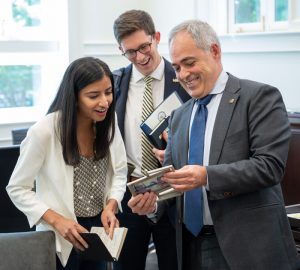 Since taking the helm as Tech’s 12th president, Ángel Cabrera has been a man on a mission.  His first day was filled with opportunities, both planned and unplanned, to meet members of the campus community and get to know Georgia Tech in a new way — not as a graduate or a parent, but as president.  In the days that followed, his efforts continued apace.  In addition to giving his first Institute Address, President Cabrera attended several campus events, including the football home opener, the opening of Tech’s newest mental health facility, and the ceremony honoring four young men who blazed a history-making trail at the Institute.

Research, economic development and other sponsored activities at Georgia Tech passed a significant milestone during the fiscal year that concluded on June 30, recording more than a billion dollars in new grants, contracts and other awards.  The record amount comes from federal government agencies, companies, private organizations, the state of Georgia and other sources.

“Tackling society’s most pressing challenges requires multidisciplinary teams of scientists, engineers, business experts, policymakers and humanists, crosses multiple areas of specialization and often necessitates involvement from more than one research organization,” Abdallah said.  “This level of funding allows us to participate in and lead more complex, more important and more impactful research projects.  We are grateful to our research collaborators and to the state of Georgia for the confidence they have placed in us by providing these resources.”

The Georgia Institute of Technology’s impact on Atlanta’s economy grew 8.5% between 2017 and 2018, according to a new analysis released August 20.

All told, the Institute was responsible for more than $3.35 billion in direct and multiplied spending in fiscal year 2018.  That’s the highest of any University System of Georgia school, according to the Selig Center for Economic Growth at the University of Georgia.

Overall, the 26 public colleges and universities in Georgia created nearly $17.7 billion in economic activity for their communities.

“The annual state economic impact report highlights just how vital University System of Georgia institutions are to communities throughout the state through the multiplier effect,” said Georgia Tech President G.P. “Bud” Peterson.  “When you add in the impact of graduates in the community, the value is priceless.  In addition, Georgia Tech is honored to contribute through research collaborations, innovation neighborhoods and partnerships throughout the state, as well as through programs to strengthen Georgia’s STEM workforce.”

A Ramblin’ Wreck from Georgia Tech is the new chief of staff of the U.S. Army.

Gen. James C. McConville took over as the Army’s top officer August 9.  He replaces Gen. Mark A. Milley, who was confirmed in July as the next chairman of the Joint Chiefs of Staff.

McConville earned a master’s degree in aerospace engineering from Georgia Tech in 1990.  A decorated helicopter pilot, McConville is the first aviator to serve as the Army’s chief.

“Armed with a master’s in engineering to go with decades of flying and maintaining helicopters, he brings a unique understanding of how to operate and support complex weapons and equipment,” said Army Secretary Ryan McCarthy.  “In this respect, no senior officer is better prepared to lead the Army as we undertake what will be a massive and, yes, risky and costly transformation towards more advanced weapons and war-fighting approaches.”

A crowd of entrepreneurs, corporate executives, and political leaders gathered at The Biltmore Wednesday afternoon for an economic development forum, looking at the role Technology Square has played in the state’s economic growth and what it will take to continue expanding.

“Being an entrepreneur is unscripted. It’s just in you,” Duncan said.  “As lieutenant governor I want to look for ways to harness and cultivate that potential here in Georgia.”

He acknowledged the role of education and thanked Georgia Tech’s leaders for striving to make Georgia the technology capital of the East Coast.

Air Force Capt. Courtney Vidt had already spent more than a week in a classroom studying the nuances of aircraft physics, radar theory, and the numerous dangers posed to military transport aircraft like hers.

Now, the C-17 pilot was presented with a new challenge: Craft a mission plan for a mock exercise that would achieve the mission objective and get herself and her crew back home safely.

“We fly in a lot of areas where threats can reach out and touch us, and this course helps us be aware of what tools and tactics we have to prevent them from doing that,” Vidt said, “whether it’s flying around it, flying over it, flying under it, or other methods — so they can’t touch us.”

Vidt was one of about a dozen pilots and aircrew from multiple branches of the U.S. military who in March 2019 descended on Rosecrans Air National Guard Base, located about 60 miles north of Kansas City.  They came for an advanced training course designed for the mobility air force — service members who fly the large military aircraft that carry people and supplies.

The course was taught at the Advanced Airlift Tactics Training Center (AATTC), which provides the highest level of training in defensive maneuvers, countermeasures, and tactics for mobility forces with the ultimate goal of keeping them safe while flying through potentially hostile skies.

But it’s not just military instructors in uniforms teaching those courses.  Working alongside them is a team of experts from the Georgia Tech Research Institute (GTRI), which for decades has partnered with mobility forces to develop technology to counter the threats that confront the military’s transport aircraft.

The GTRI team plays a pivotal role at the training center, helping students understand the science behind threats such as heat-seeking and radar-guided missiles as well as providing foundational knowledge of onboard aircraft systems and the measures used to defeat the threats.

“The goal of these courses is to save lives in the combat environment,” said Bobby Oates, a senior research scientist and GTRI’s site lead for the program at Rosecrans.  “GTRI’s role here is to provide subject matter expertise.  We’re all prior military aviators, and all of us have been on some sort of C-130 platform.  That gives us a unique understanding of the needs of the mobility air force.”