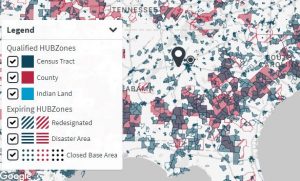 2021 is an important year for the many HUBZone firms located in redesignated areas that will lose HUBZone status after 12/31/21.  For these firms, the time is now to plan for maintaining HUBZone status in 2022 and beyond.  Here’s what you need to know.

If you are located in a redesignated area that loses HUBZone eligibility after this year, you could make plans this year to move your office to a new location that will still be HUBZone eligible after the end of the year.  Before going that route, however, you should evaluate whether you can qualify your current principal office location to remain HUBZone eligible for at least 10 years under a new rule SBA implemented about one year ago.  According to this rule, if a firm owns its office or enters into a long-term lease (i.e., of at least 10 years) for its office in an area that qualifies as HUBZone at the time of the firm’s initial certification or an annual recertification, SBA will deem the firm’s principal office to be located in a HUBZone for at least 10 years from the date of the certification, as long as the firm maintains the long-term lease or continues to own the property.