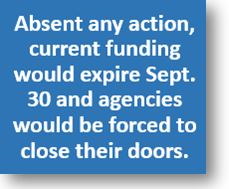 Lawmakers announced last Thursday that they have reached an agreement that would avoid a government shutdown at the end of the month.

At a conference committee meeting on Thursday, Rep. Rodney Frelinghuysen, R-N.J., chairman of the House Appropriations Committee, said lawmakers would push that timeframe back until at least Dec. 7 with a continuing resolution.

That measure would only put some agencies on autopilot, as lawmakers are poised to pass full-year, line-by-line appropriations for most of the government in the coming weeks. Congress was expected on Thursday to send President Trump the first package of spending bills, a “minibus” that funds the departments of Veterans Affairs, Energy and related agencies, as well as the legislative branch. The White House indicated this week that President Trump would sign the measure into law.

Keep reading this article at: https://www.govexec.com/management/2018/09/lawmakers-announce-deal-avoid-shutdown/151246/