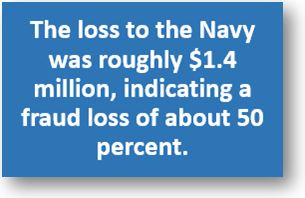 Two San Diego defense contractors were each sentenced Thursday to 15 months in custody for conspiring to commit wire fraud and file false claims, and making false statements on their federal income tax returns.

Jeffrey Harrington, 55, and Michael Mayer, 63, admitted to fraudulently obtaining money from the U.S. government by making false claims to the Department of Defense for payment on items that the defendants knew had not been sold to the Navy, but which had been substituted with other, unauthorized products.

As part of the sentence, three of the companies owned by Harrington and Mayer — San Diego-based Veteran Logistics, Industrial Xchange and Boston Laser Technology — were ordered to forfeit over $1.4 million and pay a $1 million fine for their roles in the offenses, according to the U.S. Attorney’s Office.

Keep reading this article at: https://timesofsandiego.com/crime/2017/12/14/2-san-diego-contractors-sentenced-in-department-of-defense-scam/