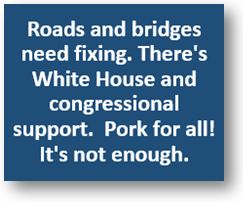 The stars should be aligned for a big infrastructure deal.

The lingering devastation from the hurricanes that crippled Houston and Florida underscored the national problems of crumbling roads and bridges, inadequate transportation systems and aging electrical grids. President Donald Trump and congressional Democrats both want Washington to spend billions on repairs and construction.

The need is critical. The American Society of Civil Engineers recently gave the country’s infrastructure a D-plus grade and estimated that its deficiencies will cost the economy $4 trillion over the next decade. As Floridians go days, stretching into weeks, without power, and with old people dying in nursing homes, the urgency is clear.

Keep reading this article at: https://www.bloomberg.com/view/articles/2017-09-17/an-infrastructure-deal-should-be-easy-but-isn-t