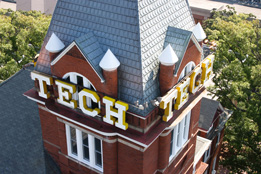 Conducted by the Selig Center for Economic Growth at the University of Georgia’s Terry College of Business, the report revealed Georgia Tech once again led the state in economic impact. Here are the impact statistics from the top five universities in the USG:

“Our University System institutions in Georgia are vital to the economies throughout our state, as calculated by the multiplier effect in the new state economic impact report,” said Georgia Tech President G.P. “Bud” Peterson. “In addition, Georgia Tech is honored to be a driving force behind such enterprises as innovation neighborhoods that attract business and industry; research collaborations with other institutions, industry, and government; the building and strengthening of Georgia’s STEM workforce; and commercializing new ideas and inventions.”

Listed as “output impact” in the study, the overall economic impact figure for the system and the individual institutions was calculated by adding the initial spending to the respending, or multiplier effect, for each institution in its host community.

Other findings for the system include an $11.3 billion in value added, $8.2 billion in income and $157,967 full- and part-time jobs. According to the study, the system generated 2.2 off-campus jobs for every job created at a USG institution.