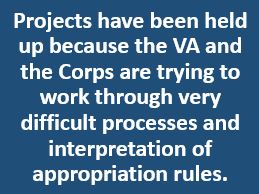 The Dept. of Veterans Affairs is seeking congressional approval for a plan to get moving on $1.4 billion in major construction projects that have been stalled because of differences in funding projects at VA and at the Army Corps of Engineers — which is handling design and construction for VA at those delayed projects.

More broadly, VA also is studying what to do about its hundreds of vacant or underused facilities.

Dr. David Shulkin, confirmed in February as the VA’s new secretary, told reporters in a May 31 White House briefing that 11 VA projects have been held up because the VA and the Corps “still are trying to work through very difficult processes and interpretation of appropriation rules.”

Shulkin, a physician by training, added, “We’re waiting for congressional approval on a joint proposal to move forward, which would allow these projects to move ahead.”

Keep reading this article at: http://www.enr.com/articles/42108-va-aims-to-unsnarl-14b-in-delayed-projects