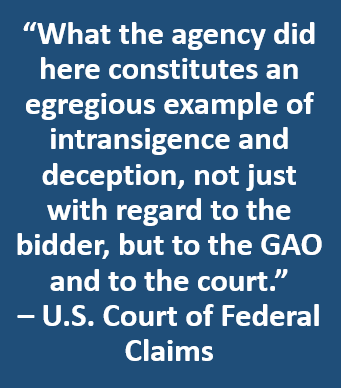 The exceptional nature of a contract protest case was demonstrated in a recent decision made by the Court of Federal Claims (COFC).

In the case, Starry Associates, Inc. v. United States, the COFC awarded “enhanced” attorney fees to plaintiff’s counsel due to the agency’s cancellation of the solicitation which the court characterized as “capricious” and “reflect[ing] a lack of fidelity to the procurement process.”

The contract’s cancellation resulted in multiple GAO protests, a hearing at GAO, multiple depositions of agency officials during a follow-on protest at the Court, and a decision enjoining the Dept. of Health and Human Services (HHS) from cancelling the solicitation

Read about this rare rebuke of a federal agency by the COFC at: https://www.insidegovernmentcontracts.com/2017/04/cofc-awards-enhanced-attorney-fees-in-protest-following-egregious-agency-conduct/