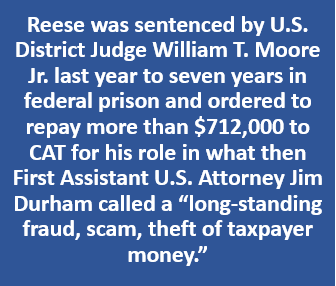 A Lithonia, Georgia contractor has been indicted by a federal grand jury in Savannah for allegedly scheming with former Chatham Area Transit (CAT) executive director Chadwick Reese and his maintenance director to defraud the transit company out of more than $200,000.

Anthony Florence, the 50-year-old owner of SR Contracting, allegedly schemed with Reese and former maintenance director Joel Morris, 54, through a series of bribes, kickbacks and concealment for work billed, but not done, for CAT.

Florence, who supposedly was providing maintenance for bus routes, concrete repairs to parking lots and other services, submitted a series of 22 invoices to Reese for $4,750 each between Aug. 19, 2013, and Oct. 2, 2015, the indictment returned last week charged.

Those invoices covered fraud between July 2013 and November 2015, the indictment charged.

As part of the scheme cited in the indictment for mail fraud, Florence “would provide bribes and kickbacks to (Reese and Morris), including payments of tens of thousands of dollars worth of work done on the homes of each.

Keep reading this article at: http://savannahnow.com/news/2017-04-10/contractor-indicted-ongoing-chatham-area-transit-fraud-scheme