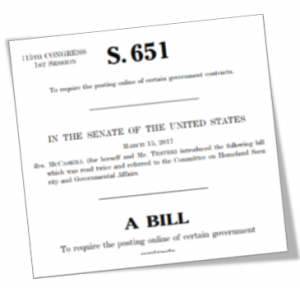 In a move intended to make it easier for the public to see what exactly federal contractors do for the taxpayer money they receive, two Senate Democrats have introduced legislation that would require agencies to post the text of major contracts online. But contractors and contracting specialists are pushing back.

On March 15, Sens. Claire McCaskill, D-Mo., and Jon Tester, D-Mont., introduced the Contractor Accountability and Transparency Act of 2017 (S. 651), which would require agencies to post a “machine-readable, searchable copy of each covered contract” within 30 days of its signing.

The bill would cover awards worth $150,000 or more and would require that contracts be posted not later than 30 days after the agency enters into the agreement.

Contractors would be permitted to request redactions of sensitive national security information, trade secrets and other proprietary information—subject to approval by the contracting officer in consultation with the director of the Office of Management and Budget. No information required to be made public under the Freedom of Information Act would be redacted, the bill says.

Keep reading this article at: http://www.govexec.com/contracting/2017/03/contractors-resist-push-post-contracts-online/136639