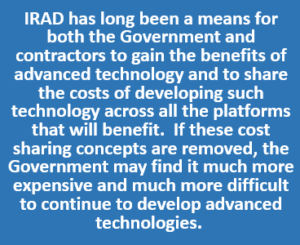 On November 4, 2016, the Department of Defense (DoD) proposed a new rule applicable to major defense contractors who expect to use future independent research and development (IRAD) to perform DoD contracts.

The proposed rule requires DoD agencies to assign an evaluation cost penalty to the proposed price of any contractor expecting to receive reimbursement from the United States Government for any future IRAD expenses through its indirect cost rates.

Comments on the proposed rule were due on February 2, 2017.  For the reasons described in this entry, we think this rule is illogical and misguided, and we hope the DoD will retract the rule or substantially revise it as a result of the comments it receives.

The proposed rule is antithetical to policy considerations favoring IRAD as a valid and valuable component of a contractor’s indirect costs, purposes strongly endorsed by Congress recently in the National Defense Authorization Act of 2017 (2017 NDAA) enacted on December 23, 2016.  The proposed rule also would add more complexity to a proposal evaluation process already freighted with rules intended to further social policy goals – sometimes at the expense of rational, price-based proposal evaluation.

Keep reading this article at: http://www.mondaq.com/unitedstates/x/569628/Government+Contracts+Procurement+PPP/Problems+Abound+With+DODs+Proposed+IRAD+Rule