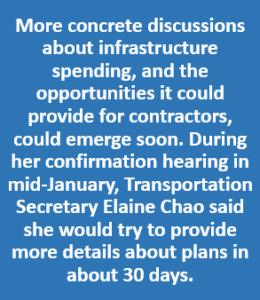 For the past few years, French entrepreneur Fabrice Brassart has been building what he thinks will be the backbone of the city of the future: a network of app-summoned self-driving cars that seamlessly navigate roads on a rubber pad lined with radio frequency identification tags.

It’s an ambitious project that’s still in the conceptual stage, at least a year from pilot deployment and four years from commercialization. Brassart is still raising funds in Europe for his Nice-based startup, REVA2, and already aims to use French cities Cagnes-sur-Mer and Rennes as testbeds—they have already expressed interest, he said. But he’s found a reason to pursue entering the American market as well: President Donald Trump’s campaign promise for a $1 trillion infrastructure spending plan, meted out over 10 years.

“We will harness technology and make smarter decisions on how we build and utilize our infrastructure,” Trump’s transition team wrote in a brief description of his plans. “Our roads, bridges, airports, transit systems and ports will be the envy of the world and enhance the lives of all Americans.”

Keep reading this article at: http://www.nextgov.com/emerging-tech/2017/02/tech-companies-prep-trumps-infrastructure-planeven-without-details/135431