An organization of IT leaders says the federal government could make changes to save more than $1 trillion during the next decade.

And the Technology CEO Council says its report on how to do it is in the hands of President-elect Donald Trump’s transition team — including Vice President-elect Mike Pence and incoming White House Chief of Staff Reince Priebus.

The potential savings include $500 billion through supply chain and acquisition reform; $205 billion in potential reductions through using big data and analytics as well as cognitive computing to make decisions; and $110 billion through IT modernization. 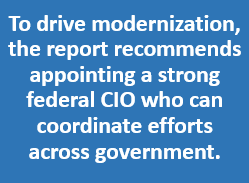 The report was released publicly Thursday, but a TCC spokesperson told FedScoop that IBM CEO Ginni Rometty shared it last month with the Trump team during the much-documented meeting of tech executives with the president-elect. TCC is the self-described “leading public policy advocacy organization” for the information technology industry, made up of exclusively IT company CEOs.

The federal IT community has not yet seen many direct indicators of how its work might be affected by Trump’s presidency. The report outlines paths the administration could take toward reducing government spending. Bruce Mehlman, executive director of TCC, said those ideas would not mean fewer government services.

Keep reading this article at: https://www.fedscoop.com/trump-federal-it-report-1-trillion-technology-ceo-council/