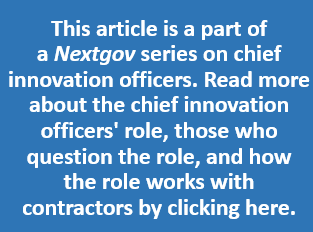 Under President Barack Obama, chief innovation officers were starting to proliferate in the federal government.

Though it’s unclear whether President-elect Donald Trump will continue to dedicate top positions to creative problem-solving, innovation-related job titles could signal to tech companies that the federal government is interested in cutting-edge technology, according to one trade group.

Nextgov chatted with David Logsdon, a senior director of public advocacy within the CompTIA trade association. This conversation, part of a Nextgov series on chief innovation officers in the federal government, has been edited for length and clarity.

Keep reading this article at: http://www.nextgov.com/cio-briefing/2017/01/what-chief-innovation-officers-mean-contractors/134338