An agency just messed up a procurement, and you want to protest. Where do you go? 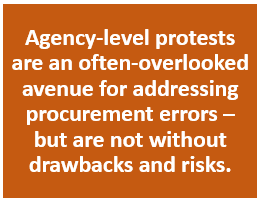 The vast majority of bid protests are filed with the Government Accountability Office (GAO).  A far smaller percentage of protests are brought as lawsuits before the Court of Federal Claims (CFC).  It is easy to forget there is a third forum available for most protests of federal procurements — the procuring agency itself, which may be preferable to the GAO and the court in certain circumstances.

Agency-level protests are governed by Federal Acquisition Regulation Part 33 and agency FAR supplements. In a nutshell, they are written complaints addressed to the contracting officer or another designated official requesting corrective action of some sort.  FAR 33.103(d)(4) allows protesters to request review of the protest at a level above the contracting officer, which the agency may allow either as an alternative to review by the contracting officer, or as an appeal from his or her decision.

As at the GAO, a protest to the agency ordinarily is timely if filed before bid opening or the date set for receipt of proposals (for solicitation improprieties) or no later than 10 days after the protest ground was known or should have been known (for all other grounds) (FAR 33.103(e)).  The GAO’s debriefing exception — allowing protests to be filed later than 10 days after a ground is known if filed within 10 days after a required and requested debriefing — does not apply to agency-level protests.  (See M2 Global Tech., Ltd., B-400946, Jan. 8, 2009, 2009 CPD ¶ 13 at 3.)

Beyond these very basic rules, agencies are generally free to proceed as they see fit in accordance with internal agency policy.

Keep reading this article at: http://www.mondaq.com/article.asp?articleid=530828