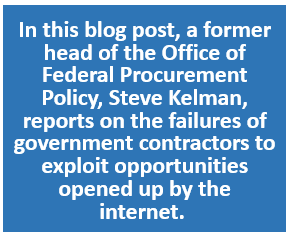 I recently had a chance to hear a small informal presentation by an executive with decades of high-level industry experience in the government contracting market, and who is very respected in the community. His remarks were sobering, and I took a chance to follow up with him after his presentation to get more meat on the bones of his discussion.

He started his presentation by asserted that no traditional government contractors had established any position to speak of in the market for cloud computing, arguably the biggest tech management shift of the past decade. Instead, Amazon Web Services, with no presence in the federal market, stole the market from under their noses. Very few government contractors had even explored entering this market.

Why, I asked? “Government contractors don’t think that way,” the executive replied. “They are very focused on government RFPs, responding to things the government puts out. That keeps them busy. But it makes them very unlike Silicon Valley companies and venture capitalists that are constantly scanning the market for new tech trends and developments. When Amazon concluded there was a potential huge market in cloud computing, they poured huge amounts of their own money into developing an infrastructure. Government contractors don’t think that way either. They don’t want to risk large amounts of their own money.”

Keep reading this article at: https://fcw.com/blogs/lectern/2016/09/kelman-contractor-outlook.aspx