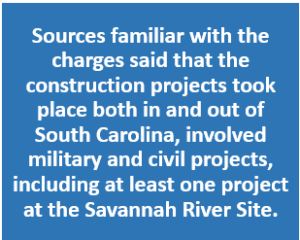 Federal prosecutors have indicted five men, two women and two corporations, alleging they illegally won government contracts worth some $350 million by misrepresenting themselves as straw companies controlled by either low-income men and women or disabled veterans.

Most of the seven are from the Columbia, South Carolina area.

An 18-count indictment in the case charges that Thomas Brock, 49 of Camden; Jerry Eddins, 66, of Aspermont, Texas; Harry Michael White, 65, of Columbia; Cory J. Adams, 43, of Columbia; Tory Brock, 51, of Camden; Alfonza McCutchen Jr., 39, of Irmo; and Allison Amanda Sauls, 46, of New York, N.Y., secretly set up an interlocking set of businesses and conspired to defraud the federal government by falsifying their eligibility to get government contracts.

The conspirators also identified, created and recruited “businesses owned by qualifying minorities, women, veterans and disabled veterans” and “hid their roles in the companies from the Small Business Administration and the Veterans Administration,” the indictment states.

Keep reading this article at: http://www.thestate.com/news/local/crime/article93268827.html