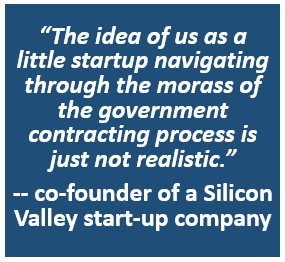 High costs, mountains of paperwork and long wait times often make working with the government a nightmare for entrepreneurs, but some agencies are trying to change that by promising startups faster and easier access to federal capital.

The goal is to give the government better and cheaper access to cutting-edge innovation beyond Capitol Hill, but industry experts warn that the red tape that has traditionally hindered federal deals won’t disappear overnight.

“In order to remain the … best Air Force on the planet, we have to be constantly innovating, and particularly when it comes to high-technology solutions, we’ve got to speed it up,” Secretary of the Air Force Deborah Lee James said in April during her second visit to Silicon Valley in four months. “And we’ve got to make ourselves accessible to more companies who can help meet our needs.”

There’s a clear need for new technology in government. The Department of Defense, for example, still uses floppy disks for certain tasks, and other agencies are running systems that use 50-year-old components, according to a report released last month by the U.S. Government Accountability Office.

Keep reading this article at: http://www.mercurynews.com/business/ci_29971260/big-government-courts-small-startups