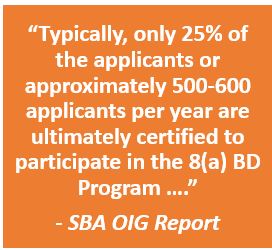 These startling numbers come from a recent SBA Office of Inspector General report, which focuses on whether the SBA properly documented the reasons for admitting certain 8(a) participants.  While that matter is interesting in its own right, the most revealing part of the SBA OIG report is the rapid decline in 8(a) Program participation, and the SBA’s plans to reverse it.

One potential reason for the low numbers: the administrative burdens of getting certified.

Keep reading this article at: http://smallgovcon.com/8a-program/8a-program-participation-down-34-since-2010/