The nation’s second most powerful court ruled against the Department of Labor (DoL) Tuesday in a case challenging when construction workers are entitled to prevailing wages on public projects. 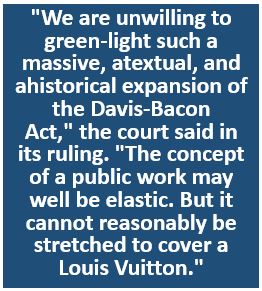 The U.S. Court of Appeals for the D.C. Circuit said the workers who built CityCenterDC, a mixed-use development in the heart of the District of Columbia (D.C.), were not entitled to prevailing wages under the Davis-Beacon Act.

The federal law applies to construction contracts that cities enter into for public works projects.

In affirming the lower court’s decision, the D.C. Circuit, however, said CityCenterDC, which features upscale retail stores like Louis Vuitton, high-end restaurants, a large private law firm and luxury residences, is not a “public work.”

“To qualify as a public work, a project must possess at least one of the following two characteristics: public funding for the project’s construction or government ownership or operation of the completed facility, as with a public highway or public park,” Judge Brett Kavanaugh wrote in the court’s decision. “Here, CityCenterDC’s construction was not publicly funded and CityCenterDC is not a government-owned or government-operated facility. So CityCenterDC is not a public work.”

Keep reading this article at: http://thehill.com/regulation/court-battles/275195-federal-court-rules-against-labor-department-in-wage-case