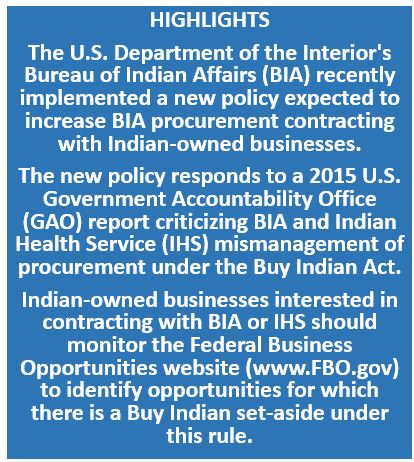 The U.S. Department of the Interior’s Bureau of Indian Affairs (BIA) on Jan. 12, 2016, announced a new policy to improve the implementation of the Buy Indian Act of 1910 (Act). The policy, announced in a memorandum by Acting Deputy Assistant Secretary – Indian Affairs (Management) James Burckman, comes in response to a U.S. Government Accountability Office (GAO) report, released in July 2015, that criticized the federal government’s enforcement of the Act.

The Buy Indian Act authorized certain federal procurement contracts to be set aside for preferential awards to Indian Economic Enterprises (IEEs) for all procurement contracts issued by the BIA, the Bureau of Indian Education (BIE), the office of the Interior Assistant Secretary – Indian Affairs (AS-IA) and the Indian Health Service (IHS). In 2013, regulations were issued that defined IEEs as those companies which are at least 51 percent Indian-owned.

While the BIA and IHS have obtained services and supplies from IEEs under the Act since 1965,the GAO found that Buy Indian procurements have comprised only a small percentage of BIA and IHS annual contract obligations, the result of limited knowledge and implementation of the set-aside in regional or area offices where contracts are often awarded.

Keep reading this article at: http://www.mondaq.com/article.asp?articleid=461952