In a report issued last week, the Office of Economic Adjustment (OEA) of the Department of Defense (DoD), reported that Georgia ranked 8th among the 50 states and the District of Columbia in DoD spending during FY14 (Oct. 1, 2013 – Sept. 30, 2014).

This following charts summarize key information extracted from the report pertaining to DoD spending in Georgia. 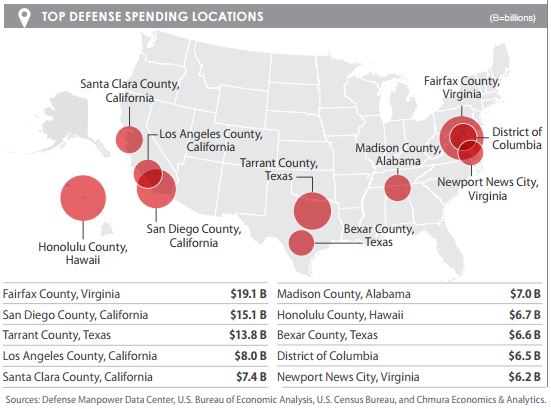 According to the federal budget, FY15 national defense spending is expected to decline 28 percent from FY 2011 to 2019 in real terms, after increasing by more than 65 percent from FY 2000 to 2010. Sequestration went into effect in March 2013 and required across-the-board cuts to defense and non-defense programs from FY 2013 to 2021. Over this period, DoD spending will be reduced by a total of $454 billion.

DoD’s state-by-state spending report can be downloaded from this page: https://www.oea.gov/library/directory/defense-spending-by-state-fy14.