Warning: version_compare() expects parameter 2 to be string, array given in /home/customer/www/gtpac.org/public_html/wp-content/plugins/all-in-one-seo-pack-pro/app/Pro/Utils/Addons.php on line 75
 Cracking the code on past performance | Georgia Tech Procurement Assistance Center

Would you hire contractors to fix your house’s sagging porch without first verifying not only that they could swing a hammer, but that they were competent carpenters whose work had stood the test of time? 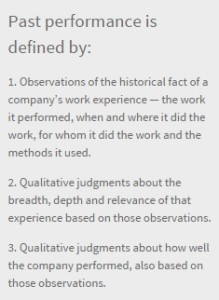 Probably not — and neither should the government. Knowledge of a worker’s — and a company’s — past performance is the grease on the wheels of commerce in the federal acquisition process.

Over the years, the federal government has institutionalized past performance in its deliberations over contracts big and small — so much so that it has become a complicated, sometimes bewildering and utterly integral part of the acquisition environment.

By federal mandate, agencies must have an intricate understanding of a company before they sign a contract with it. It’s a laudable goal, but it has also produced daunting electronic and paper trails that contractors must navigate.

Keep reading this article at: http://fcw.com/articles/2015/07/30/bookshelf_performance.aspx