The SBIR Road Tour is a national outreach effort to convey the “non-dilutive technology” funding opportunity provided through the Small Business Innovation Research (SBIR) and Small Business Technology Transfer (STTR) programs. Over the course of this year individual program managers from the 11 participating agencies representing $2.5 billion in early stage funding will embark on a 20-state road tour, participating in a series of events alongside technology entrepreneurs and innovation supporters from across the United States.

The SBIR Road Tour is scheduled to arrive in Atlanta on Thursday, March 26, 2015.

The Atlanta event will be hosted by the Metro Atlanta Chamber, located at 235 Andrew Young International Blvd., NW, Atlanta, GA 30303.

A featured speaker at the Atlanta event will be Connie Casteel of Georgia Tech’s Advanced Technology Development Center (ATDC).  Here’s what the Atlanta agenda looks like: 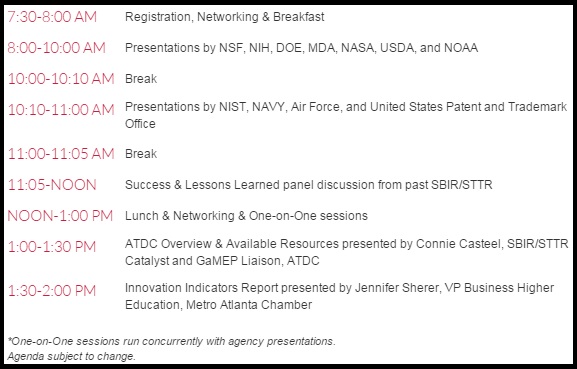 Other stops on the tour include: