Government officials are fiscally optimistic. They see improving budgets and increased spending. More than four out of five administrators (86 percent) see their government’s budgets in the second half of 2014 equal to or greater than second half 2013 budgets, according to an exclusive E-survey of readers of Penton magazines Government Product News, American City & County and Government Procurement. 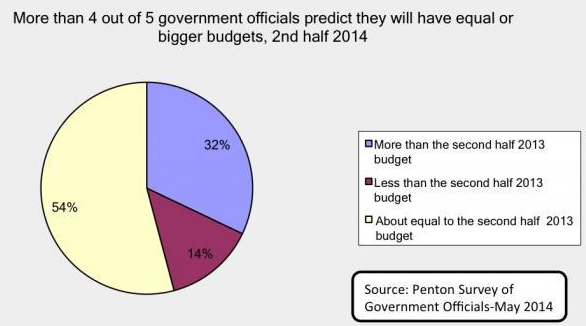 Yes, government officials may be more upbeat than they have been in the past, based on the survey results: Almost six out of 10 respondents say they expect to receive the same level or more federal and state funding to their local government in 2015 compared to 2014.

Keep reading the Keating Report mid-year 2014 forecast on government budgets and spending at: http://americancityandcounty.com/gpn/keating-report-mid-year-2014-forecast-government-budgets-and-spending-part-1.   This article appeared in the June edition of Government Product News.   The mid-2014 edition of the Keating Report includes forecasts on government purchases of goods and services and comments from experts. More sections from the mid-2014 edition of the Keating Report, covering state and local government revenue drivers and government constructioncan be found at: http://americancityandcounty.com/gpn/keating-report-mid-year-2014-forecast-government-budgets-and-spending-part-2.