Major U.S. companies including General Dynamics Corp. and Medtronic Inc. have received billions of dollars in federal government contracts that were supposed to go to small businesses

The BGOV Barometer shows that about $4.74 billion, or 45 percent, of more than $10.6 billion targeted for small businesses under government acquisition rules were won by bigger competitors in the year that ended Sept. 30, 2011, according to data compiled by Bloomberg.

Companies that need the revenue the most are losing opportunities, said Margot Dorfman, chief executive officer of the Washington-based U.S. Women’s Chamber of Commerce.

“I think this particular issue should be one of the top concerns of the Small Business Administration and the president,” Dorfman said in an interview. “Fix it now. Let’s not wait.”

Keep reading this article at: http://about.bgov.com/2012/11/13/big-firms-edge-out-small-for-billions-in-awards-bgov-barometer/ 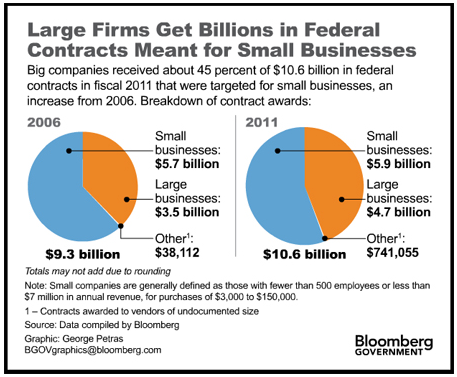