During a recent Fairfax County (Virginia) Chamber of Commerce event small, woman-owned and veteran-owned businesses converged to learn about the federal government contracting outlook for 2012 and hear from those who have been in small business shoes.

The panelists’ companies represent a wide array of socioeconomic statuses that act as differentiators and could allow them to fulfill the specific teaming needs of other contactors. However, both Panzarella and Halfaker stated that leading with socioeconomic statuses is not a key to surviving or thriving as a government contractor.

So if your company’s unique qualities won’t make you stand out, what is the best way to get started and win your first government contract?

Murphy’s data showed that while some socioeconomic goals have not been met by certain agencies, they have been increasing. By focusing on the agencies that are striving to meet their small business contract goals and creating relationships with contacts within them, a company will be making a better investment of its time than trying to focus on every agency at once.

The Departments of Veteran Affairs, Homeland Security, Energy and General Services Administration are among the agencies increasing their spending with small businesses. However, not all agencies are making these increases. The Small Business Administration is one such agency: Murphy stated that the SBA will be making cuts, which means less monitoring and enforcement of rules.

Furthermore, heavy cuts will affect the SBA business development centers. This will affect relationships in a couple of ways: Small businesses will have to rely more on each other, and valuable relationships may be better invested in other potential teaming and subcontracting partners.

“We had a lot of success partnering with other large companies. It is easier to connect with their points of contacts compared to agency contacts. Leverage
those relationships. You need to focus on agencies, but limit it,” said Halfaker.

She went on to say that at times, it can be difficult to identify the right point of contact in both agencies and large companies. Relationships with existing connections can help point you in the right direction.

When it comes to partnering and opening a line of communication to other contractors, there must be a give/take relationship, and you must work at it.  Unless you continue to communicate with agencies and partners, your relationship could become strained. “Out of sight, and out of mind,” said Panzarella.

Panzarella also stated that prior to building a partnership, CPS Professionals Services requires that small businesses already have a scope and plan in place. 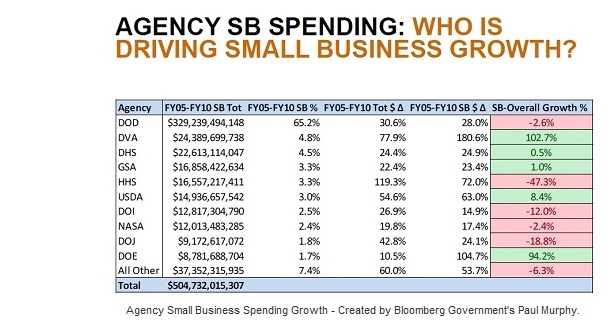 Planning and Preparing for Growth

Though Halfaker & Associates and CPS Professionals Services may have started in the proverbial basement and were initially funded by equity loans, they knew that as they began to win more contracts, growth and complications would be inevitable. Contractors must plan not only how to grow by adding new
employees and infrastructure, but what to do in case of delays in federal payments. Panzarella and Halfaker suggested that spending time wisely (not wasting it on events that won’t result in new connections or beneficial information) and creating a focused plan led to their companies’ growth.

“Hard work. We put in a lot of hours because I believe in where we are going as an organization. We don’t have to go in and win multi-million-dollar awards, we can take the million-dollar contracts,” said Panzarella. His company remained very focused on what it wanted, picked a few agencies, and pursued them.

About the Author: Elliot Volkman holds a Masters in digital communications and is the Community Manager of GovWin from Deltek.  Published Dec. 19, 2011 at http://govwin.com/elliotsv_blog/surviving-and-thriving-as-small/340486.